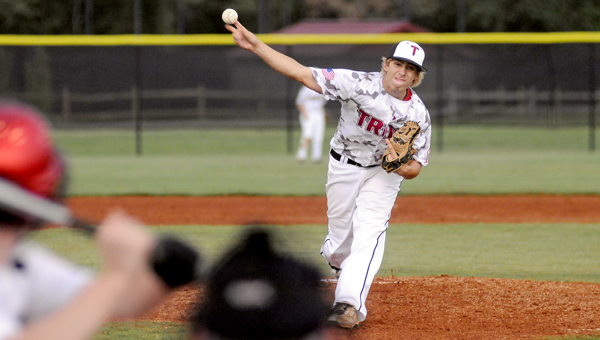 Dothan – After pummeling Crenshaw Friday, Troy’s 14-year-old Dixie Boys team had a bit more of a challenge with Ashford in an 8-2 win Saturday.

Hunter Baggett scored on a wild pitch to break a 2-2 tie and Devon Hooks hit a double with the bases loaded scoring all three runners in the sixth to give Troy a 6-2 lead.

“They tested us today,” head coach Gary Fox said, “Ashford has a good team and we really had to fight for this win.”

Troy took a 1-0 lead when Austin Ingram led off the game with a double and scored later on an error. Chase Hartley would score in the second on a wild pitch to make the score 2-0.

Ashford responded with single runs in the bottom of the second and third innings to tie the game.

Troy would add two runs in the seventh to cap the scoring.

Hartley started on the mound for Troy pitching 2 2/3 innings allowing two runs on three hits while striking out four.

“Fleming did a good job in relief. Coach [Brett] Stallworth saw they were having trouble hitting the curveball so we went ahead and made the change,” said Fox.

Fox said after the game he planned on letting Hartley pitch to his 95-pitch limit but felt the change in strategy was due solely to the difference in pitching styles.

“Hartley was our guy today and did a good job but we felt Fleming’s curveball would be effective against what they were trying to do.”

Baggett and Hooks both finished 2-for-3 and the plate.

Troy will take Sunday off before returning to the diamond Monday, July 4, to face the winner of the Dothan-South Dale game. Game time Monday is set for 8 p.m.