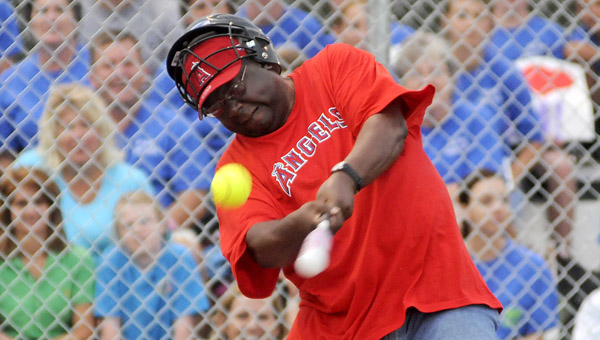 Angeles player Hazel Upshaw hits the ball during a game after the opening ceremony for the Miracle League Field in Troy, Ala., Thursday, June 23, 2011. (Messenger Staff Photo/Thomas Graning)

It was an event four years and one week in the making.

That wait however did not diminish anyone’s excitement for what took place at the grand opening of the Troy Miracle League Field Thursday night at the Sportsplex.

A little over 200 people gathered to watch the Angels and the Braves play in the inaugural game, but no one there cared about who the final score, because on this night, everyone was a winner.

“We are just really proud for the children,” said Dan Smith, Director of Troy Parks and Recreation. “That is the greatest reward of this whole process – watching them play the game they love.

“There have been so many stories of how much the children have been waiting for this day. This is truly the first time a lot of these children have had people cheer for them and that is rewarding to not only us but each of the families.”

There were 25 players split into two teams playing ball, with each and every single of the players getting a hit and scoring a run.

“It was a lot of fun to hit the ball,” said 10-year-old Heath Flemming, who played for the Braves. “This is a lot of fun.”

For the next three weeks, the teams will play every Thursday at the Sportsplex at 6:30 p.m.

While there are just two teams now, Smith said there would be more on the way.

The field itself was a collective effort from the community, and even though it took a number of years, it was worth it in the end.

“It was about four years ago that the city decided on getting a Miracle Field in Troy,” Smith said.

“After a few years of fund raising, the money came together and the community has just been so supportive of a project like this.”

There was one collection of Troy residents who played a big role in both.

Back in 2009, the Troy Pre-Minors baseball team raised close to $6,500 to donate to the field construction.

On Thursday night, each of those players and coaches were there to witness the momentous occasion.

“The player’s goal was to come out and be a part of this moment,” head coach Frank Scarbrough said.

“This is just overwhelming to see these kids come out and realize this dream. We wanted to help make this happen and we were fortunate enough to. To be out here, it’s just a humbling experience.”

While each of the players participating in the games had a good time, the same could be said about their loved ones watching on.

“This is just so excited,” Juanita Upshaw said after watching her brother Hazel hit a home run.

“It’s sprinkling right now, but we do not care – this is a blessed day. We had a great time with the Angels. For Troy to have something like this is just magnificent. Troy is a beautiful city and this field makes it that much more beautiful.”