Troy athletes among arrests at The Pines 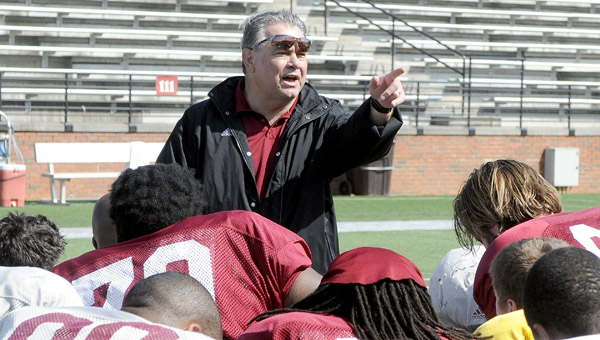 Above, Troy University head coach Larry Blakeney talks to players following the first spring scrimmage of the season. Three members of the football team were arrested for the consumption of alcohol early Wednesday morning at The Pine restaurant in downtown Troy.

The Troy University athletic department will be trying to figure out a way to deal with the aftermath of the Alabama Alcohol Beverage Company’s raid at The Pines restaurant in downtown Troy.

Of the 50 or so people who were arrested for underage consumption of alcohol, at least three were members of the Trojan athletic family, and more specifically, members of the football team.

“Of course, from a university and athletic stand point, we want all our young men and women to be of the utmost high quality of character,” said Troy Athletic Director Steve Dennis Wednesday afternoon from Atlanta.

“Until I can find out just exactly what happened, we will see and take each case and situation and come up with a proper way to handle it. Right now, I want to figure out what happened, who was where and things of that nature.”

By Wednesday afternoon, there had been 50 people charged with 51 offenses. One individual that was apprehended was also charged with a felony drug charge.

“What happens more often than not, disciplinary actions will go through team standards,” Dennis said.

“Ultimately, we will want to do it in a fair and appropriate way. We don’t want to throw any one under the bus for making a mistake. At the same time, we have to find out what the degree of the mistake was and go from there. Bottom line, we want to do something that is not only beneficial for the university but also for the young people involved because we want to teach them how to grow.”

Like it has in the past when dealing with instances similar to what occurred at the restaurant, the football program itself will take action quickly, according to the Trojans’ head coach.

“We are dealing with young people and without naming names, anyone that was involved with that will be immediately suspended and put on probation with the program,” Larry Blakeney said. “We’ll move forward and see what the resolution of the situation is and deal with it from a team prospective.

“The main thing is, I hope no one got hurt. But the law is the law and you have to abide by the law no matter who you are, Kappa, football player or a businessperson in this town. There will be ramifications from the player’s standpoint.”

The coach continued by adding that he was both disappointed and bothered that ‘the law was ignored point blank’.

“It is always disappointing when something like this happens,” Blakeney said, “and from all perspectives.

“It’s disappointing to me that we allow any organization or sponsors to have such an event and not be in compliance with the law. I don’t doubt that we had some kids there, I don’t doubt that we had some underage kids there who were possible involved with the underage drinking. We will deal with it from a team perspective in the understanding that we are dealing with young kids who were in the wrong place at the wrong time doing the wrong thing.”

Riddle honored and remembered after passing