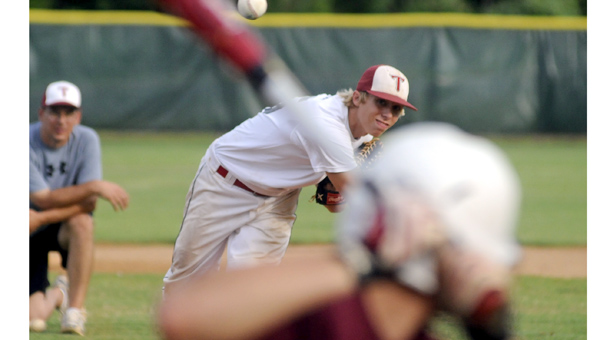 After falling short in last season’s World Series, much has changed for the 2010 Junior Dixie Boys team.

With the core of the team back for another shot at the ultimate recreation title, now as the 2011 Troy Dixie Boys 14-year-old team, expectations are high as the tournament season edges closer and closer.

But that is none of the 13-roster member’s concern as of right now.

All the players are concerned about is the next pitch – and they have the shirts to prove it.

Each member of the Dixie team, both coach and ball player, has a shirt that says “One pitch at a time” on the front, as a reminder that the present is what is most important and not worrying about what may happen in the distant future.

“That’s the slogan for this season and one that each of the players have really gotten behind,” head coach Gary Fox said. “We want to win every pitch, offensively and defensively.

“They all want to go to South Carolina (home of the 2011 Dixie World Series) but I think they all know just how important it is to stay focused at the task at hand.”

On the back of the shirts, there is a target with the player’s respective number in the middle, signifying that this Troy team will be the one everyone wants to beat.

“It’s not going to be easy for us to get where we were last season,” Fox said.

“We expect to get everyone’s best. We know we are a wanted team in the state of Alabama – but that’s what we want. The boys really feed off of that. We have a talented group here, it’s going to be fun to watch these guys play ball.”

Before the tournaments even begin, the Troy may have the upper hand on the rest of the competition. Most of the team’s roster from last season was kept in tact, with the addition of three players.

While the experience most of the team got last year thanks to its World Series run will prove helpful, Fox said there is another factor that will be even more beneficial.

“(The team) definitely has the advantage going in of playing in big games, while other teams have not,” the coach said. “But the chemistry is the biggest thing going for this team.

“These guys have been playing together since coach pitch and that is something that is going to go a long way. Chemistry is huge.”

Like most of the players, Fox will be returning as the head coach.

And as he watches his team during practices, he said he has noticed some small difference between this summer and last summer.

“They were a great team last year,” he said, “obviously, there is always room for improvement.

“I have noticed that a lot of guys are stronger. The balls are coming off the bats hard this time around. Some of the guys are a lot faster around the bases. Physically, they have grown a lot in a year’s time.”