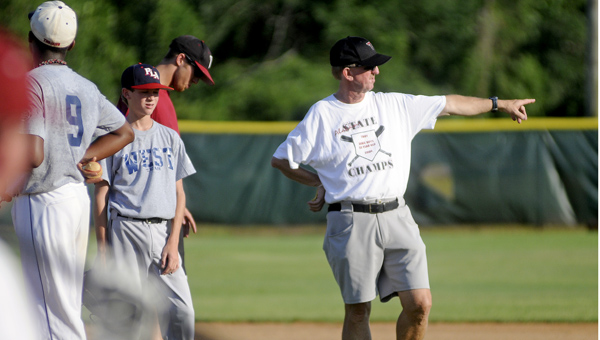 For nearly four decades, there has been one name consistently associated with Troy tournament baseball.

He helped develop talent in young baseball players that has taken teams all the way to World Series championships.

And he is back at it again this season.

For a 37th summer, Sam Kitchens is back on the diamond, looking to get back to the summit of the tournament season, this year with his Junior Dixie Boys team, which is made up of 13-year-olds.

Even though the team was put together just a little over a week ago, Kitchens said he likes what he has seen at practice.

“We are still a work in progress,” the coach said, “but I think we got a good group of kids that are going to play well together and have a good moral about everything.

With the tournament games beginning in just about two weeks Kitchens and his team have been working on the fundamentals of the game to prepare themselves.

The biggest aspect of the practices so far have been on the aforementioned pitching, which the coach says is coming along thanks to the talent he is surrounded with.

“The big thing with pitching is trying to develop some depth with our guys,” Kitchens said.

While fine-tuning the mechanics of each player is important, making sure everyone gets along also plays a large role in the tournament team process.

“One thing we do with these teams is encourage the guys to hang out with each other outside of practice,” Kitchens said. “That helps build chemistry.

“On the field, we have some practices games coming up, which will help see how we play together, and where we need to improve. You never are quite sure where you are until you play someone else. I am beginning to feel good about this group.”

There are many reasons why each of the players and coaches are out on the field practicing in the summer sun.

But at the end of the day, what motivates each and every one of them is something more than just the game itself, according to Kitchens.

“Competition is a big factor,” he said, “but I think pride in the community and their pride motivates them to be better.

“The tradition is another factor. We have a tradition in Troy of being strong and competitive every year. We may not win it every year, but you can never count us out. When you put Troy on that shirt, people tend to step up a notch and look at you a different way.”