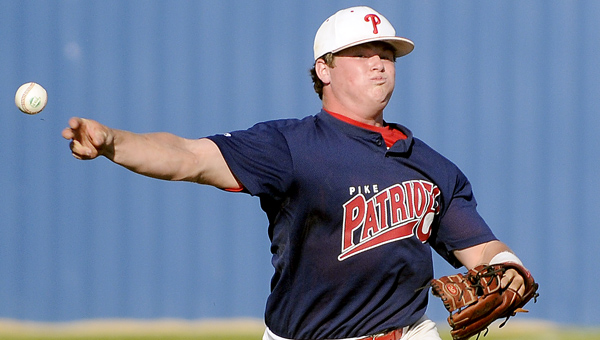 Pike Liberal Arts School's Will Starling releases a throw to first base during the Patriots' game vs. Lee Scott Academy, in Troy, Alabama, on Monday, April 12, 2010. (Messenger Staff Photo/Thomas Graning)

As the recreation tournament season begins to ramp up, all eyes will be fixated on which young teams are going to make a run for a World Series title.

But there is one team made up of not so young players that will have as good a shot as any at a championship.

For the first time in over a decade, Troy will have a Dixie Majors team, which is filled up of 19-and-under players.

That roster resembles one of an All-Star team, as current and former high school players from around the county have joined forces to represent their town at the highest level.

Leading the charge for the Majors will be head coach Russ Harris, along with assistant coaches, Greg Barnett and Scott Ross. With the expectation of the three raising high school seniors on the team, a large majority of the lineup is playing at the college level, including Will Starling and Hixon with Southern Union, McLeod with Central Alabama, Grant with Wallace Community College, Hall with AUM and Moody with Lurleen B Wallace Community College.

While one might think constructing a team like this would be difficult, Harris said it all came together in a short amount of time.

“In between me knowing ball players and ball players that had heard about the team and wanted to play, the roster filled up pretty quickly,” Harris said. “It’s a pretty amazing team. All these kids know each other and have played together. This all worked out very well for us – it’s going to be a lot of fun.”

Troy is not the only town with a roster filled with top-notch baseball players, as Birmingham, Mobile and Auburn also will be making strong runs at a championship.

However, Harris said he believes his group will be competitive with any one of those teams.

“We may clown and joke around, but when we step on the baseball field, we are serious,” the coach said.

“Bottom line, they are all baseball players and they all like to win. All these guys know and respect each other. I hope the expectations are World Series or bust.”

Even though the opportunity to win championships is a large factor, the opportunity for friends to with one another for the first time in years played a large role as well.

“It’s going to be fun to play with guys like Mitch and Nathan again,” Will Starling said.

“For so long, we have been playing on different teams, but we get the chance to play together again. There is no doubt, this is going to be awesome.”

The team will also reunite Will and his brother, Josh, on the diamond for the first time in two years.

“Playing with all these college players, like my brother, is going to be a great learning experience for me,” Josh Starling said. “And playing with Dalton and Gregory is going to bring back great memories of the good old days.

“Everyone is just happy to be playing together. I would have to say, this will be the best recreation team I have ever played on.”

At the end of the day, regardless of the names on the roster, all are working together for the same goal.

“There have been no problems with any of these kids,” Harris said, “every one wants to do what they can to win.

“All these guys love the game, and in the end, that’s why they are all here playing. It’s a relaxed atmosphere, and so far, the guys are enjoying themselves. I don’t have to tell them what to do, because they all know what their jobs are. All I am doing is making a lineup out.”