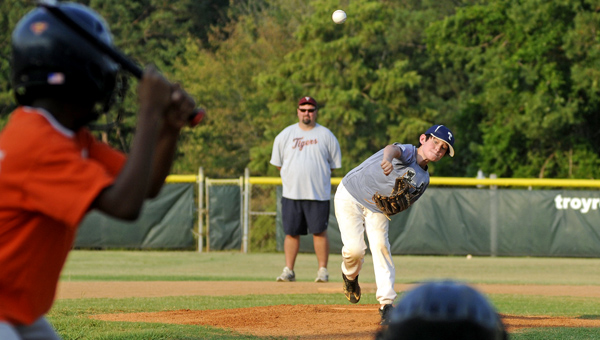 The players and the coaches have been assembled.

The practices have begun, as the hunt for championships is about to begin.

It’s tournament time again, as the Troy recreation baseball and softball tournament teams have been selected, and thus beginning of the most anticipated seasons of the year.

“There is a lot of history and tradition with our tournament teams,” Troy Parks and Recreation Director Dan Smith said. “It’s a case where it is truly one community verses another community and it has been that way for decades.

The aforementioned luck has been with the Troy teams for several of the past couple of summers, as teams have brought home many trophies, including four World Series titles, won by three Dixie Boys team and one Dixie Minor team.

But bringing back trophies does not always define being successful when it comes to this time of the year.

“Success is not always the number of trophies or accomplishments that we may be able to accomplish,” Smith said.

“Our sportsmanship, how well we represent Troy and giving our best efforts are really what defines success. But at the same time, we are very proud that we have had some state champions and World Series champions.”

In all, there are 14 different teams this year, 11 of which are baseball with the remaining three being softball.

Leading the charge will be the Dixie Boys, 14-year-old, which is primarily made up of last year’s 13-year-old team that advanced to the World Series.

The head coach will be Gary Fox, who was the boy’s coach last season.

Frank Scarbrough will coach the team.

The Nationals will be coached by Chris Huner and will have Brax, Barron, Clay Barron, Trevor Barron, Laertis Brantley, Brock Huner, Noah Lowery, Cole McWhorter, David Phillips, Noah Phillips, Chance Pollard, Will Reeves and Will Stephens on the team.

Brett Stallworth will coach the boys from that team.

David Nelson and Billy Jeffcoat are the head coaches of the two coach pitch teams, the Americans and the Nationals.

Those rosters were not available by deadline.