Riddle honored and remembered after passing 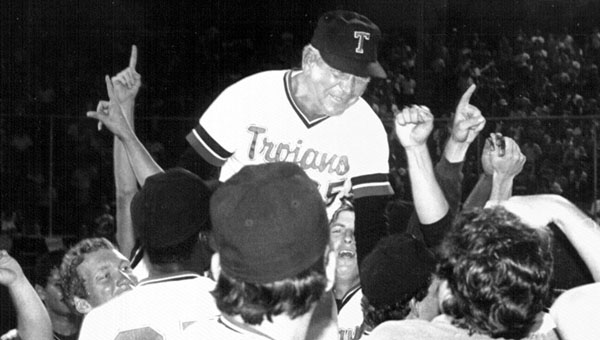 Troy University lost an icon over the weekend

Over the span of 12 seasons, Riddle amassed a win total that few have reached, winning 434 games, including helping the baseball program to its only National Championships, when it was with Division II, back in 1986 and 1987 and five Gulf Conference titles.

Smartt knew the former Troy coach both as a player and a fellow coach, as he played for Riddle from 1986-87 and joined Riddle on the bench for two seasons following his playing days.

“As a player, he got the best out of every player that played for him – and every player wanted to play their best for him. He made you feel like the most important player on the team, whether you were or not. As a coach, in those two years, I probably learned more baseball then I had my entire life. Listening to him talk and getting information from him and through him was a really good reward for me and helped me beginning my coaching career in the right way.”

While Riddle may be best known for what he was able to do with Troy baseball, he also had a hand in several dealings with clubs on the major league level.

At the age of 17, he signed a contract with the Boston Red Sox, however took part in World War II with the Navy.

He again joined the majors in 1955, this time with the St. Louis Cardinals organization as a player/manager with farm teams across both the United States and Canada.

In 1978, Riddle, who attended Troy after his time with the Navy, returned to the Trojans.

The rest is history.

“He was a great coach, but he was a greater person. He had a unique gift in making the person he was talking with feel extra special. He was a positive influence on teaching me how to treat people and teaching me to treat my players – he was a truly special person.”

Riddle’s final season with the Trojans was 1990, shortly after that came the retiring of both his number, 25, and the naming of the field after him.

The field of the Trojans would not be the only thing named in his honor, however, as several former players of Riddle named their children Chase, one of which was Smartt.

“My son was named after Chase Riddle for all the right reasons,” Smartt said.

“He was such a big part of my young adult life and more importantly, our son has a tremendous understanding of who he was named after and why and if he can be one-tenth the person that Chase Riddle was, he will have achieved some great things.”

“My son is very proud to bear his name,” he added.”

The Troy sports community is not the only one that will feel the effect of the coach’s passing, as the city itself also mourns the saddening news.

“Chase Riddle was to Troy what Bear Bryant was to Alabama,” local television personality and Troy alumni Mike Amos said. “He had that kind of demeanor and that kind of appeal.

“He was a very good friend, and just someone that you loved to be around. Everyone in Troy just rallied to him, everyone just loved. He was a humble guy and an extraordinary coach. I have known him all my life – I just loved him so much.”

Visitation for Riddle will be held at First Baptist Church of Troy, today, at noon with the funeral following the ceremony at 2 p.m.