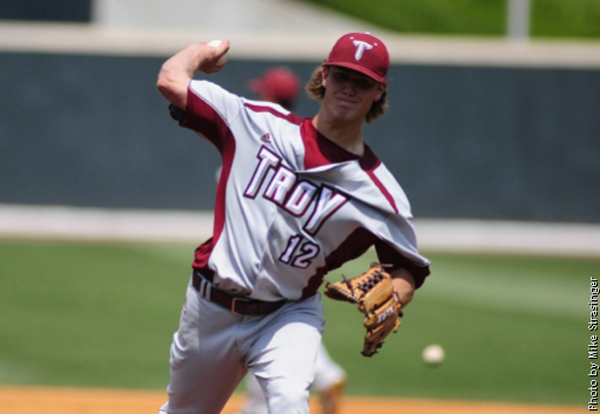 Tyler Ray led the Trojans to a first-game victory in the NCAA Nashville Regionals on Friday.

NASHVILLE – No. 21 Troy’s regular combination of quality pitching, strong defense and timely hitting once again keyed a victory as the Trojans took a 9-2 win over Oklahoma State in the opening game of the NCAA Nashville Regional.

With the win, the Trojans advance to face the winner of Vanderbilt-Belmont tonight night at 7 p.m.

The victory also improved Troy to 3-8 since moving to Division I in NCAA Regional play and also broke a three-game winless streak since 2006.

Troy starter Tyler Ray (12-0) gave up two runs early, but then got in his groove as he put up five straight scoreless innings en route to his eighth game pitching into the eighth inning. He threw 95 pitches and struck five in 7.2 innings of work while earning the victory.

The five strikeouts by the junior All-American moved him into a tie for seventh place on Troy’s career list with James Wray with 184 punch outs. His 46th career start also moved the Hoover, Ala.-native into a tie for third place all time with Donnie Elsberry.

Oklahoma State took an early 1-0 lead on a solo home run by Luis Uribe to start the bottom of the second inning. Ray allowed the homer, but worked around a single to retire the side, including a swinging strike out for the third out in the second.

Devin Shines started the third inning with a double to the wall in right. He moved to third on a groundout before ultimately scoring on a RBI single by Zach Johnson. The ball was popped up in shallow right field, but T.J. Rivera couldn’t find it in the Sun. Tyson Workman, who was playing deep, was unable to get there in time and the ball dropped for a hit and a 2-0 Cowboys lead.

Adam Bryant led off the fourth inning with a single before making it all the way to third with just one out on a ground out and wild pitch. The senior came in to score on an infield single by Todd McRae to cut the deficit to 2-1.

Bryant again was the catalyst, starting the sixth inning with a double to the left field corner. Rivera followed up with an RBI single back up the middle to plate Bryant and tie the game two at two. Next was Shear who walked on four pitches, then McRae sacrificed to the pitcher to put the go-ahead run at third with just one out.

The double closed Bryant to within one of tying Jeff Javinet for the Troy record at 56 doubles. The senior All-American finished the day 2-for-4 with three runs scored.

OSU’s Hunter Herrera then loaded the bases with a free pass to Logan Pierce for Hayden Hillyer. The redshirt freshman responded with an RBI single to left to give the Trojans a 3-2 lead. A bases loaded walk to Tyson Workman sent Shear home for a 4-2 lead.

Herrera (3-2) took the loss for the Cowboys after 5.1 innings and four earned.

Tyler Hannah came up with a clutch hit in the top of the eighth with two down as he crushed a three-run triple to the wall in right to clear the bases and push Troy’s lead to 7-2. The drive plated Pierce, Blake Martz and Workman.

The hit was Hannah’s lone knock of the day, but perhaps the biggest of the afternoon. He finished with three RBI to give him 52 for the year.

Troy sent nine men to the plate again in the eighth, this time thanks to a two-run double by Rivera that plated Hannah and Bryant for a 9-2 advantage. Shear kept the inning alive with after he reached on an error by Cowboys third baseman Mark Ginther, but McRae grounded out to short to end the frame.

Rivera led the way for the Trojans at the plate with three hits.

A walk to Zach Johnson marked the first free pass of the game for Ray. It also ended his day with two on and two out in the eighth.

Nate Hill entered with two on and induced a pop up to short by OSU catcher Jared Womack to end the threat. He then worked around a hit batter and a walk in the ninth to close out the victory.

Freshman Jimmy Hodgskin (3-6) will toe the rubber for Troy against the still to be determined opponent on Saturday night at Hawkins Field.