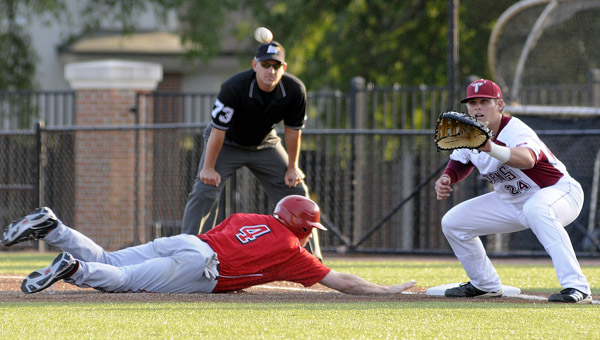 For many Sun Belt teams, the pressure to win a championship is a heavy burden.

For the Troy Trojans however, the same could be said, but for a different reason altogether.

With a regular season championship already won, the Trojans will enter the conference tournament, which starts today, looking for not only another title, but for assurance that it will be playing past this upcoming Sunday.

Even though the Trojans secured the regular season crown thanks to 21-9 Sun Belt record, 40-16 overall, there is still some doubt in the mind of head coach Bobby Pierce whether or not his team is a lock for the regional tournament.

In 2005, the Trojans won the Atlantic Sun regular season title, and finished 37-21 overall, however was not selected as an at-large bid for the regional tournament after falling in the conference tournament.

“When you experience the disappointment like that, I don’t think you take anything for granted,” Pierce said.

“Those memories are still pretty vivid. The last thing we want to be doing is watch the selection show and not get in. Teams that want to take time off are not preparing themselves for the next level. Our message of ‘being the team that plays the best today will win the game’ will remain the same. And hopefully, our players will embrace that, as they have all season.”

That is why going into the tournament, Pierce and the Trojans are focused on the task at hand.

“It comes down to one game at a time and one pitch at a time,” the coach continued. “That is so cliché but it how can you not say that when we live like that day-to-day.

“When you start looking ahead or back, you are in the wrong place. That’s the way we are going to look at the tournament.”

Currently, Troy has an RPI rating of 47, which Pierce described as being right on the line of possibly getting in or possibly being left out.

The only way to truly secure their bid is to win games in the tournament, and a big part of that process will come from the pitcher’s mound.

“We have to be smart about how we use our pitching,” Pierce said.

“If I was convinced that we were already a lock for the regional with 40 wins and a regular season championship, I would probably limit (Tyler Ray’s) work and bring in other guys.”

“There are a lot of things I would like to do in preparation for a regional tournament. But coach (Mark) Smartt will not let me be convinced that we are a lock.”

That is another area of interest for the team heading into the conference tournament, whether it will get a regional at-large bid if it does not win the automatic bid with the tournament championship.

“I told the team that they have to get their work done,” Pierce said.

Getting their work done is exactly what the Trojans have done during the last couple weeks of the regular season.

In three of the last five weekends of the regular season, the Trojans had been playing against several teams that had a lot of building momentum.

The No. 2 team in the conference, FIU, was trying to overtake the Trojans for the title, Louisiana-Monroe was trying to stay alive so it could play in the tournament it is about to play host to and the South Alabama’s long time head coach Steve Kittrell was retiring.

Troy won each of those series, finishing 6-3 against the three teams.

“The last couple of weekends have really felt like we were in the playoffs,” sophomore Logan Pierce said.

“We were trying to nail down the championship, while being chased by a good FIU and other tough competition.”

The former Charles Henderson Trojan had a .239 batting average with four home runs and 43 RBIs in 56 games this season.

And while the regular season may have prepped the Trojan for life after the conference tournament, Logan said all that matters right now is beating Arkansas-Little Rock Wednesday night.

“We have talked about the regionals here and there, but we are really trying to just focus one game at a time,” he said.

“It’s one of those things where we hope that it happens. We can’t really look forward to it because we can’t focus on what may happen then.”