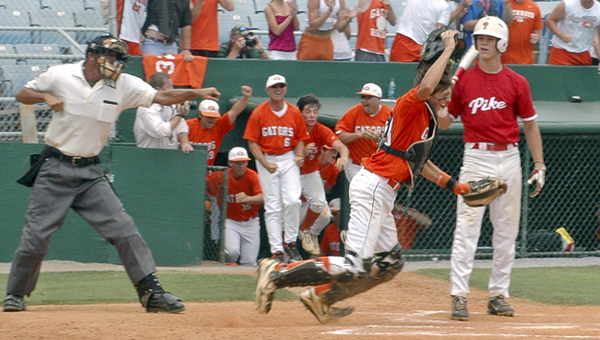 Tatum Barnes stands at the plate after a called third to end the game and the Patriots' season. (Photo/Greg Rossino).

Unfortunately, that excitement turned into heartbreak less than an hour and half later.

In the final game of the season, the Patriots were hoping to take out the Glenwood Gators one more time for the school’s first ever baseball state championship.

However, Glenwood pitcher Tyler Condrey had other ideas, as the senior right-hander completely shut down the PLAS offense, giving up just one hit in a complete game shutout.

The Gators clinched their third-straight state championship, and 19th overall, thanks to a 4-0 win at Paterson Field.

“We didn’t do what we were supposed to do – we didn’t hit,” PLAS head coach Butch Austin said.

“I thought we were ready to play. There were a lot of first pitch swings, but we have seen (Condrey) before so we knew what to expect. But, we can’t play it again, so that’s it.”

The loss marks the second-straight season that ended at the hands of Glenwood in the championship game.

The shutout was the first since this season’s season opener – also against Glenwood.

On the mound for the Patriots was junior Lawson Stewart.

Just two days before the start, Stewart suffered an injury on the middle finger of his pitching hand during practice.

Despite the injury, the right-hander threw a complete game, giving up three runs off of six hits, while striking out two.

Glenwood struck first in the top of the third inning, thanks to a hit, an error and two walks that helped scored two runs.

The Gators also scored in the fifth and seventh innings.

“Giving up the two walks were huge for them,” Stewart said about the third inning.

“They got that hit that scored both runs and got a lot of momentum. We fought hard, we just were not able to get anything going.”

On the opposite side of the plate, the Patriots struggled to get anything going offensively all game long.

Evan Strother got the team’s first hit in the fifth inning. Before that, Strother and Sam Carroll reached on errors, while Tatum Barnes was hit by a pitch.

“I thought we deserved this, but I guess in the end, it just wasn’t meant to be.”

In the final two games of the season, the Patriots’ first four batters went a combined 1-21, with Carroll getting the only hit in the second inning of game two. In those games, PLAS tallied up just five hits, six base runners and one run.

“We all worked really hard this season just to get to his point. We went into (Thursday’s game) looking to play defense and hit the ball. We played well defensively, but we couldn’t hit the ball where we needed to.”

The loss finished the Patriots’ season with a 36-6 overall record, the most wins the program has ever had.

“This team went far beyond what I expected,” Austin said. “I didn’t expect to be here at the end of the season.

“It’s just unbelievable. We had some individuals who really stepped up, our seniors, players like Lawson, Nick and Blake Floyd. I am so proud of every single one of our players. And for our seniors – they mean the world to this program.”

“We had a tough day,” a teary-eyed Carroll said.

“I honestly think we are better then them, we just didn’t play like it. This one hurts. This one really hurts.”