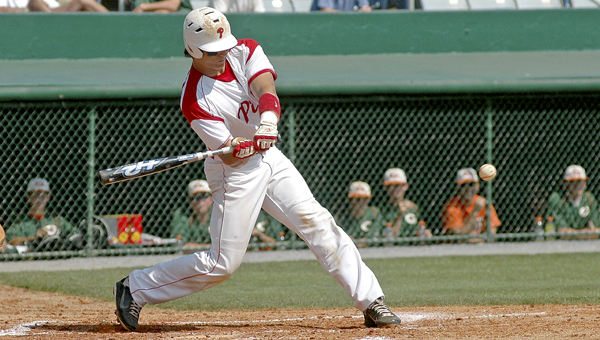 Nick McLaughlin hits a triple in the bottom of the first inning in game one that brought home the first run of the day. (Photo/Greg Rossino).

While two games were not enough to determine the AISA AAA State Champion Wednesday afternoon, today’s game will.

Both Pike Liberal Arts and Glenwood came away with a victory at Paterson Field Wednesday and now, both are in a winner take all situation with a third and final game in Montgomery today at 11 a.m.

For the Patriots, it was a case of two completely different games.

In game, PLAS took control early thanks to some big hits from Nick McLaughlin and won 5-1.

The following game saw a 1-0 Patriot lead in the second inning turn into a 8-1 deficit by the third inning, before the Gators polished off an 11-1 victory in five innings.

It was the first time this season the Patriots were defeated by the 10-run rule.

And even though PLAS ended the first day of the championship series on a down note, head coach Butch Austin said he believes his guys will regroup for the final game of the season.

“I think we let a lot of things get in our heads (in game two),” Austin said.

After Blake Floyd threw a complete game, four-hitter in game one, the Patriots’ ace Sam Carroll took the mound, trying to clinch the title.

It was not to be, however.

Glenwood would take an 8-1 lead at the end of three, before scoring the final two runs needed against Josh Starling in the bottom of the fifth.

“I just didn’t bring my best game,” said Carroll, who lost his second game of the season, both to Glenwood.

“We didn’t play a good game. In a way it’s difficult to have to come back (for game three) out here and in a way it’s not. We get another shot to win it – that’s all we need.”

The Gators out hit the Patriots 14-4. Lawson Stewart finished 2-2 with a single, a double and the lone run.

Carroll and Starling were the only other Patriots to reach base.

Game one started off with a bang, thanks to the bat of McLaughlin.

With Chandler Avant on first base, the junior centerfielder hit a ball off the centerfield wall bringing home Avant and putting McLaughlin at third base.

Two innings later, again with Avant on first base, McLaughlin hit a ball 330 feet over the left field wall to give the Patriots a 3-0 lead.

An inning later, Tatum Barnes rang the bell with a homer of his own over the left field wall to make it a 4-0 game. After a Glenwood run in the sixth, Starling would score on a pass ball to make it a 5-1 game.

“They embarrassed us in the second game,” Floyd said. “They took control of us and got in our heads.

“A loss like that is always tough to get over, but this is the state championship. I thought we played our best playoff game in game one. If we play like that again, we are going to win this thing, no doubt about it.”

Starting for the Patriots on the mound today will be Stewart, who last pitched in the first game of the semi-final series against Monroe Academy.

“We have to have a different attitude (today),” Stewart said.

“I think we went into (the second game) maybe a little too over confident and those errors messed us up. We know we can beat them, we did it (on Wednesday). We just have to have our minds right in the final game.”