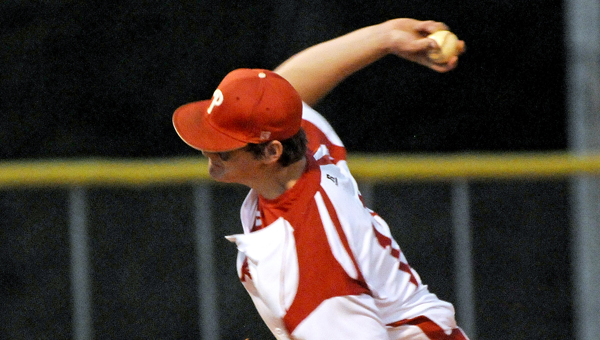 It’s been a little over a year since the Pike Liberal Arts baseball team last stepped foot on Paterson Field.

Then, the Patriots’ season had just come to an end at the hands of Glenwood Academy, thanks to a two-game sweep in the AISA AAA State Championship game.

It was the first time since 1996 that PLAS was able to advance to title series.

As it turned out, year later neither Patriot player nor fan had to wait nearly as long.

For the second-straight season, PLAS finds itself preparing for baseball in Montgomery while starring the back-to-back defending champion Gators directly in the face.

During that year’s time, the two have developed quite a rivalry.

Going into the game, the Gators have won two of the three meetings this season.

The two teams opened their respective seasons with one another back on February 14 at Riddle Pace Field, where Glenwood won by the score of 9-1.

The lone Patriot win was maybe the biggest of the season in the rivalry, as it helped PLAS clinch the area championship and the No. 1 seed in the tournament.

On Tuesday afternoon, the Patriots were taking part in their final practice.

And despite the distractions of a looming championship series, you would not notice it in how any of the players were playing.

It was business as usual at Butch Austin Field, and that’s exactly how the head coach was hoping it would be.

“This is it,” Butch Austin said, “we have come to the last day of practice.

“I think our guys are ready. I know I am, but we are going to find that out (Wednesday).”

As normal, the team participated in several fielding drills before facing live pitching during the afternoon practice.

Even though PLAS may be going into the championship game as the top seed, Austin said he feels Glenwood may be to the team favored to win it all by everyone outside of Troy.

“In my opinion, I rather be the favorite,” he said. “But if you are the underdog, you might play harder.

“I don’t know if it’s one way or the other. I think Glenwood should be the favorite though. They are solid all the way around.”

The coach pointed out that he thinks the two teams match up well offensively and defensively. It’s the pitching that could be the difference in the end, in his eyes.

“I think as far as good pitching, in a three game series, we match up well,” Austin said.

“But as far as numbers, they have more.”

As of Tuesday afternoon, Austin said he did not know who was going to get the start on the mound for the Patriots in game one.

While Tuesday may have been the final practice of the season, it is the final time three players will be playing baseball on their home field, as Sam Carroll, Evan Strother and Andrew Quincey will all be graduating in the coming weeks.

“It has finally begun to sunk in,” Carroll said after batting practice.

“It’s a lot all at once – my last practice and the championship game. But that’s the way I wanted it to be. I’m trying not to make (the title game) like it’s bigger then any other game. Everyone is excited and ready to play. We get Glenwood one more time, and that’s what we want.”

Over the course of the last week, many of the players said they were happy with the aforementioned ‘underdog’ role going into to today’s game, but in the end, they all were excited for who the final opponent was going to be.

“I love playing Glenwood, I wouldn’t want to play anyone else for a state championship,” Strother said.

“You got to play the best to be the best.

“I want to enjoy these last couple of games and do anything I can to help this team win.”

Now, with all the practices done and over with, there is only one thing left to do.

“It’s a bittersweet feeling really,” Quincey said about his time with the Patriots coming to an end.

“I’m happy my final game is going to be in the state championship though. That’s kind of a cool way to go out – now we just have to finish on top.”

The Patriots and the Gators will get underway this morning at 10 a.m. at Paterson Field.

The second game will begin shortly after the final out of the first game. If a game three is necessary, it will be played on Wednesday in Montgomery.