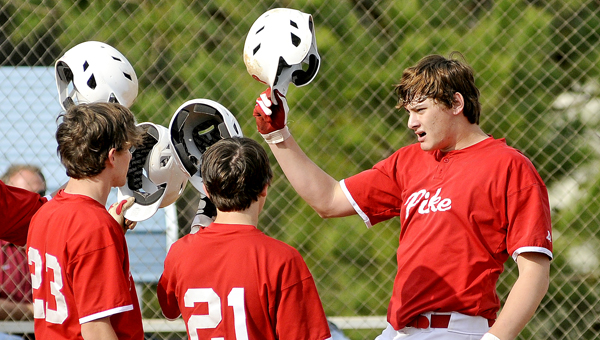 This is it for Sam Carroll.

Whether it’s three games or just two in the 2011 AISA AAA State Championship series, once the end of the Pike Liberal Arts’ baseball season comes so to will Carroll’s career as an athlete.

And that is just the way he wants it to be.

Despite getting offers to play at the next level in either baseball or football, the PLAS senior will attend Auburn next semester and begin a new career – as a college student.

“These are my last games,” he said with a smile, “it’s kind of weird to think about, but it’s what I want to do.

“I have been playing sports all my life. Now, I want to focus on something else.”

Over the last two seasons, Carroll has been a big part of helping the Patriots reach back-to-back state championship games.

During that span, the senior has a 16-2 record on the mound, winning 11 of those games this season.

At the plate, Carroll has hit 16 home runs as well, with a career-high 12 coming this season.

But aside from the statistics, Carroll has meant a lot to this team’s current success thanks to his leadership qualities.

“Sam is a totally different player than how he was (as a junior),” Carroll’s head coach Butch Austin said.

“He wants to be the leader. He wants to be at the plate or on the mound. He has become one of the finest ball players we have ever had to play here.”

Austin spoke of a time midway through the season when his team was in search of its leader.

It was Carroll that stepped up and took the team by the reins.

“That changed everything,” the coach said.

“All the young guys really listened to him and paid attention to what he was saying. When you are a leader, you got to produce – and that’s exactly what Sam has done.”

But even with the pressures of a final game in the state championship that may bestow upon someone, Carroll said he and his teammates are relaxed.

“I feel at first there may be some pressure, but we got to play through that.

“A lot of us have been here before, so that is going to help out a lot. All we have to do is relax and play the game,” he said.

Since his sophomore year, Carroll has been a part of the varsity baseball team.

And with the end so close, the senior said everything has not really sunk in just yet.

“Whenever I talk about (the championship game), I get some butterflies, but other than that the only thing I have thought about it just making sure we win,” Carroll said. “That’s what I want my legacy to be. I want to walk off the field a champion. Everyone does – that’s what we have all worked so hard for this season.”