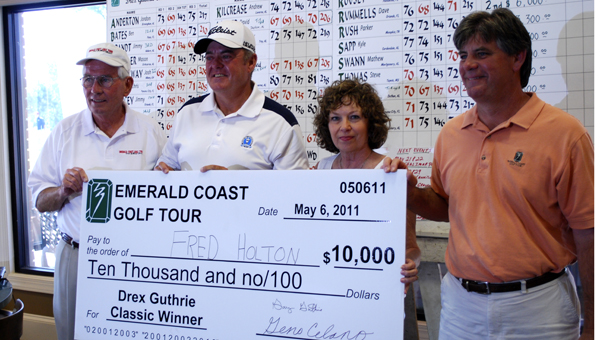 And when it was all said and done, it was Fred Holton who was the last man standing.

The Champions Tour member finished with a 198 after the three-day event, shooting a 70 in the final round.

That was good enough to help land him the $10,000 winner’s check as well as a much-needed victory.

“This win means a lot,” he said after the check ceremony. “It’s always nice to be in the winner’s circle.

“I know my game has been better than I have been showing out on the Champions Tour, I guess I have been trying to hard I guess. (This tournament) has really helped me relax out there this week. Been around a lot of great guys on the course and a lot of great people around Troy. That all helped.”

There was not much time to relax however late Friday afternoon as Holton had to hold off Nick Rousey, who finished in second place after shooting a 67 in round three to end at 199.

Jimmy Brandt rounded out the top three, after shooting a 66 in the final round, closing with an even 200.

“There were a lot of great golfers competing,” Holton said.

“It was hard holding off the young pups, but this was a lot of fun.”

The three golfers bested a field of over 30 pros, with a total purse exceeding #30,000.

While many attended for the opportunity to play golf and win some money, there was another, more important, reason behind the tournament itself – the honoring of a former golfer.

It was Gary and Carla Guthrie who were the title sponsors for tournament, in honor of their late son, Drex.

It was because of their son’s love for the sport that the tournament came about.

“The tournament was more than a success,” Guthrie said.

“We were overwhelmed with the response from the community and players, and that really meant a lot to us. Plus, it meant a lot to other people, as we were able to donate over $8,000 to charities, like the Red Cross. Overall, a lot of people put a lot of time in to making this happen and because of them, we look forward to doing this again.”

But for the Guthrie’s, just to be able to honor their son with a golf tournament was a special thing.

“It means a lot,” Guthrie said. “But it’s more than that.

“Drex loved golf and played it his whole life. He sought a career in golf. Golf was always a priority to him, next to the family. So, having all this put together in memory of him is fantastic and we are going to do it every year.”