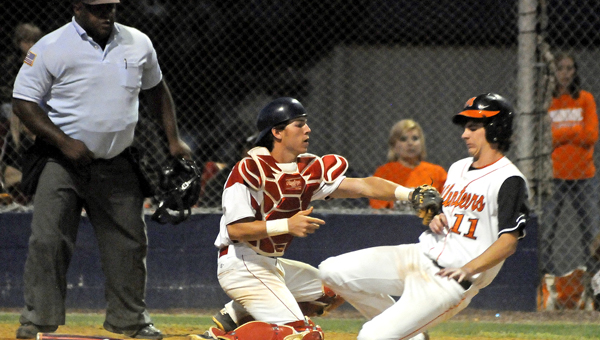 In the bottom of the seventh, with the Pike Liberal Arts Patriots leading the Monroe Academy Volunteers 5-1, Sam Carroll stepped to the mound looking to record the final three outs.

The first two batters both went down the same way, as strikeout victims, the final out came on a diving catch by right fielder Tatum Barnes.

And with that catch, Carroll and the Patriots achieved a feat never before seen in the program’s storied history – back-to-back appearances in the AISA State Championship game.

The win capped off a sweep of the rival Volunteers, thanks to an 8-3 victory in game one, and allowed PLAS to advance to next Wednesday’s title game at Paterson Field.

“We are going again,” head coach Butch Austin said with a smile.

“At the first of the year, I didn’t know if we were going to go back or not. It’s a great bunch of young kids – and I am proud of them.”

While the offense has been key to many of the Patriots’ 35 wins this season, it was the pitching of Carroll that helped clinch one of the most important wins of the season.

The senior pitched a complete game, striking out 10, while giving up six hits and one run.

“Sam Carroll, what more can I say,” Austin said. “He pitched the best I have ever seen him pitch.”

It was in the fifth inning where Carroll found himself in trouble, as the Volunteers loaded the bases with just one out.

“I just told myself I was not going to allow them to get score any runs – I blocked out the runners and just focused on the batters,” an exhausted Carroll said after wards.

A strikeout and a ground out later, Carroll was out of the inning and Monroe saw their last chance to salvage their season slip away.

“I think I pitched ten times better than I did against Wilcox (last week). I didn’t press. TO help get this team back to the state championship is a phenomenal feeling.”

The Patriots got on the board in the top of the first inning, when Chandler Avant stole home. That run was followed up by a Nick McLaughlin RBI single that brought home Blake Floyd.

In the following inning, PLAS struck again, thanks to a RBI double by Floyd and another run batted in off of the bat of McLaughlin.

The Volunteers were able to score their lone run in the bottom of the fifth, however a Josh Starling RBI double brought the lead back up to five runs in the top of the sixth.

“This year, for much of the year, we were the underdogs,” Starling said. “That’s the real difference between this season and last season.

“We had to really work for everything this season – and it makes it that much sweeter. But we still have a lot of work to do.”

Like the night-capper, the first game was a relatively low scoring affair.

It was the Volunteers who struck first blood, thanks to a lead off triple that eventually scored a run in the top of the first.

From then on, it was the Patriots’ game, as the home team struck back quickly.

On a 2-0 pitch, with Avant on first base after a single, Floyd gave PLAS the lead thanks to a two-run home run over the left field wall.

Just one batter later, Carroll followed the same way, with a solo shot, to give the Patriots a 3-1 lead after one full inning of play.

Despite starting pitcher Lawson Stewart’s struggles, Monroe was unable to match PLAS on the scoreboard.

In both the second and third innings, the Volunteers had bases loaded with one out, however were unable to produce thanks to the Patriot defense.

“Those were two big innings for us,” Austin said. “The defense played well under pressure.

“That could have been the difference in the ball game, had they scored.”

Monroe was able to get two runs across in the top of the fourth inning, to cut the PLAS lead to 4-3, but the Patriot bats would have an answer. Both Rob Benton and Evan Strother brought two runners home on a double and single, respectively, to tally up an 8-3 score.

Floyd would come in for the save opportunity and shut the door, tossing the last two innings, giving up just two hits and striking out one.

“This is an incredible feeling,” Floyd said after the second game.

“This is the same (Monroe team) that put us out in the second round of the playoffs two years ago. That loss was something we never forgot. We played our hearts out here (Wednesday night) and to be able to beat them to advance to the championship games makes it that much sweeter.”

Monroe stranded 12 base runners as well on the day.

“It feels good, it feels like we accomplished something,” senior Andrew Quincey said.

“There is still a long way to go, but this team as a lot of heart.”

The win puts PLAS at 35-6 on the season, with the final series set for next Wednesday at Paterson Field, with the first game beginning at 10 a.m.

“I’m proud of everyone on this team,” Austin said.

“Coach (Bob) Pickett and every single one of our players have worked their tails off this season. We are out here for these kids and to see them get another chance to win it all – I am thrilled to death about it.”