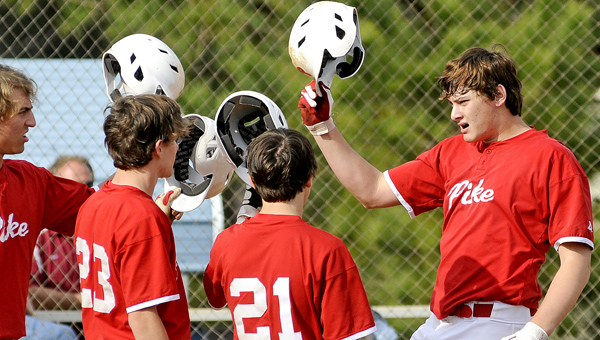 There is only one obstacle standing in the way of Pike Liberal Arts and Patterson Field in Montgomery.

And it is an obstacle the Patriots know quite well.

For the second time this season, the Monroe Academy Volunteers will make the two-hour trip up I-65 to Troy to take on PLAS however this time the stakes are higher as the two will meet in the AISA AAA semi-finals.

Between the two teams, there is plenty of history – and not just on the baseball diamond.

This past football season, the Volunteers took out the Patriots, including in the semi-final round of the playoffs – ending the PLAS season.

It was just two seasons ago that the Monroe baseball team ended the Patriots’ season in an earlier semi-final matchup.

Even though the Patriots may have swept the baseball season series earlier in the regular season, by a combined score of 29-4, the past does not matter in the post season.

“Obviously, this is a huge series,” senior Evan Strother said. “And just because we 10-run ruled them earlier, means nothing.

“You never know what could happen in the playoffs. I think we may have some confidence going (into the series), but we still have to play at our very best.”

What got the Patriots to the second round of the playoffs was a two-game sweep over Wilcox Academy last week.

In that series, the offense continued to produce runs, scoring a combined 27 in 10 innings, but it was the pitching that left several, including head coach Butch Austin, concerned after wards.

Against the Wildcats, PLAS pitchers walked 15 batters, while giving up 11 runs off of 11 hits.

That is a statistic Austin said he hopes he does not see again.

“I think our arms just weren’t as ready as they needed to be,” the coach said.

“We have taken a different approach this time around to help get our guys better prepared. Pitching is going to play a big role – if we are going to win the first game, we are going to do it with pitching.”

As he did last week, junior Lawson Stewart will take the mound in game one for the Patriots.

While the pressures of a second round playoff series may be on his shoulders, Stewart said he is ready for what is to come.

“It’s all about throwing strikes and getting ahead early,” the right-hander said.

“I am going to go into the game with confidence, go in and work hard. It’s exciting to be getting to play a good team like Monroe again, with so much on the line.”

The PLAS pitching rotation will go the same as how it did last week, with senior Sam Carroll following Stewart in game two.

The strongest aspect of the team all season long has been the ability to score runs early and often.

Junior centerfielder Nick McLaughlin has led the way for the Patriots in that department all season long and continued to do so in postseason, thanks to his two home runs and six RBIs in round one.

Now, he will hope to do the same and in the process write a new chapter in the rivalry.

“We can’t drag around like we have sometimes done this year,” McLaughlin said.

“We have to keep the intensity up, mainly, and play well on defense. We know what Monroe has, which helps. But that doesn’t mean we are going to take them lightly. They got the best of us two years ago – this time around is going to be a different story.”