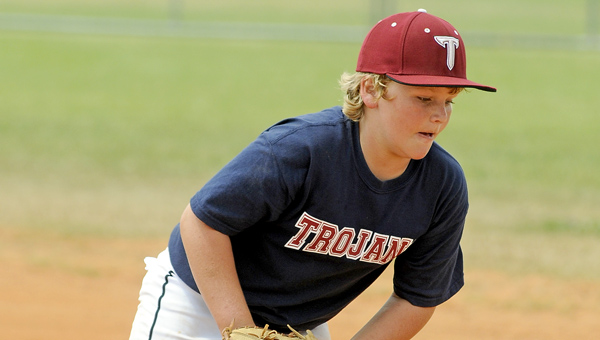 A Troy Trojans player fields the ball during a baseball game in Troy, Ala., Sunday, May 1, 2011. (Messenger Staff Photo/Thomas Graning)

While the recreation baseball seasons have been going on for over a month now, several Troy teams got a chance to show off their talents against some out of state talent his past weekend.

The first time ever, Jeff Speed and Ultimate Sports Promotions brought in one of their multi-state tournaments to Troy and the Sportsplex.

In a two day span, nearly 60 different teams from Alabama, Florida, Georgia, Louisiana and Mississippi competing against one another.

Of the four teams, three came out of the tournament with at least one victory.

The 10-and-under Troy Trojans went a perfect 4-0, outscoring its opponents 51-14 in those games.

Both the 10-and-under Troy Thunder and the 11-and-under Troy Trojans went 2-2 over the weekend, The Thunder got two victories over the WSA Sluggers while the Trojans defeated the Wiregrass Cardinals and the Whitecaps.

The 12-and-under Trojans dealt with several difficult losses to the Bandits, the Post 12 Academy Tigers and the LA Hurricanes.

All in all, Speed said the weekend was a successful for every team, win or lose.

“When you can get a tournament this size, it really takes a lot of people to do their part and that was the case here. Troy is a good central location in the tri-state area, and that along with the facilities, helped bring in a lot of good teams for this tournament.”

Along with the tournament taking place over the weekend, the annual TroyFest celebration of arts and crafts was also taking place – providing for a large economic boost for the city.

“Between TroyFest and this tournament, Troy is going to have a banner year,” said Pam Nix, Troy Parks and Recreation Programs Coordinator and Adult Activities Coordinator.

“Every hotel was full, as were the restaurants and Wal-Mart, which is a great site to see. Everyone has told us what a great time they have had and how they want to come back later on. So that is really good news for Troy.”

Troy's Jerrel Jernigan (3) runs the ball past Florida International's Anthony Gaitor (7) during the second half an NCAA football... read more