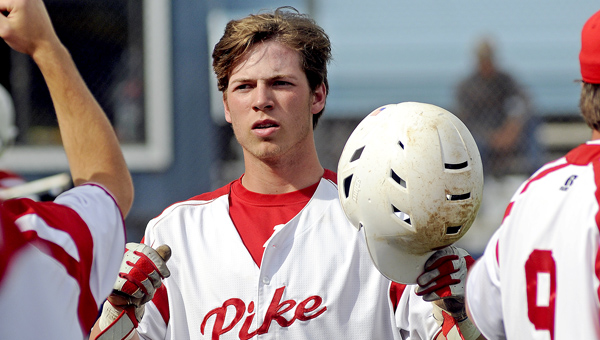 Every once and a while, an event comes around that makes people change the way they look at their lives.

One of those people is currently on the baseball diamond, trying to help his team capture its first ever state championship.

Junior catcher Blake Floyd has been a major contributor for the Patriots of Pike Liberal Arts this season.

However, there was time back in November where not only his baseball career but also his entire athletic career was in serious doubt.

What started as a basic procedure to remove Floyd’s tonsils in Enterprise in the beginning of November turned into a trip to Birmingham in the back of an ambulance after he lost consciousness. During that time, Floyd began suffering from irregular heartbeats and by the time he woke up, he and his parents, Ashley and Trish, were on the way to Birmingham.

“It was a scary thing,” Floyd recalled. “I don’t really remember too much, but I do remember feeling sick (in Enterprise) and the next thing I knew I was in an ambulance – I really didn’t know what to make out of it all.”’

The answers to what exactly had happened did not come quickly.

Floyd was placed in the Special Care Unit at the Children’s Hospital in Birmingham for five long days, as tests and different procedures were run on his heart.

When the news did come about, it was one that was unexpected.

“A cardiologist came in and told me that I had Long QT syndrome,” Floyd said.

“When they told me what that was, I had no idea what they were talking about. They told me I was going to have to take this medicine for the rest of my life.”

That news did not nearly have the same effect the next thing the doctor told Floyd.

The catcher was told his playing days were done. Floyd could no more participate competitive sports of any kind, for the rest of his life.

“I was in shock,” he said. “I honestly could not even think straight.

“My life revolves around baseball, that’s all I have ever wanted to do since I was a little kid. I was very upset and very emotional. Whenever you get devastating news like that, it really takes control of you.”

Long QT syndrome is a rare inborn heart condition in which delayed repolarization of the heart increases the risk of episodes of irregular heartbeats, among other things. These kinds of episodes can lead to several different things, including fainting and sudden death.

After the disheartening news was delivered, Floyd said he and his family prayed ‘each and every single’ night trying to find a solution to the situation.

The week of Christmas, those prayers would be answered.

Floyd and his family traveled to Emory University in Atlanta for a second opinion and with another round of tests showing a cardiologist there were no signs of Long QT syndrome.

However, there was another disorder in neurocardiovascular syncope, which represents abnormal neutral control of the cardiovascular system and is triggered by large amounts of caffeine and heat, according to Floyd.

“We put our faith in God and our prayers were answered,” he said.

“Most importantly, this is nothing major that could kill me or anything like that. Also, I was told I was free to play as long as I stay well hydrated.”

While the news of Floyd’s health spread quickly around the school and community, it was his coaches and teammates that took the most solace in knowing their comrade was going to be OK.

“When you can’t play something you love, you are going to be upset – and Blake was upset,” PLAS head coach Butch Austin said.

“I, along with others, prayed a lot about it. I always felt like something was going to work out. Physically, he is not where he was at last season at this time, but he has done an outstanding job this season to give it his all. I know how much he loves this games and he shows it every day.”

One of the players who was most effected by the situation was one of the team members that has to know Floyd well – Sam Carroll, the Patriots’ No. 1 starting pitching.

“Blake means a lot to me,” Carroll said. “When I heard about everything, I got choked up.

“It was kind of unbelievable. Blake was just 16-years-old and something like that happened to him. It really makes you put things into perspective.”

Now, just five months after being told he could not play, Floyd is in the middle of a title run, as the Patriots will look to secure a trip to Montgomery and the AISA AAA state championship game for the second-straight season on Wednesday.

But all the stats do not compare to the joy of just being able to run out on the field with his teammates.

“I think that is what I am most thankful for,” Floyd said, “being able to just come out and play.

“It changed a lot to me and how I look at things. A lot of times, we all take things for granted. I did with the game I love the most. Now, I thank God every day for everything he has blessed me with.”

Even though Floyd still has to go in for check ups every so often, there have been zero ultrasounds that have showed any kind of issue with his heart.

“I think Blake has realized there are more things in life than just baseball after everything,” Austin said.

“I told him that when he came back. The situations that he was in helped make him understand that. To see him back, happy and healthy is a great thing.”