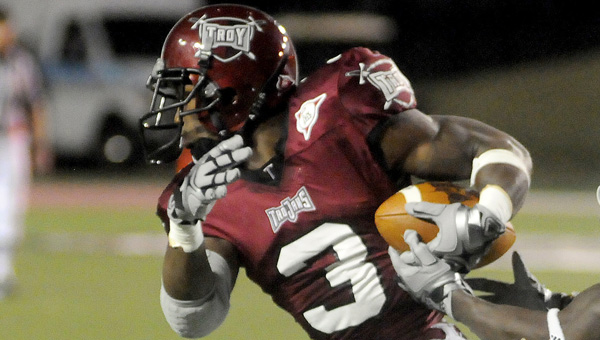 Troy's Jerrel Jernigan (3) runs the ball past Florida International's Anthony Gaitor (7) during the second half an NCAA football game in Troy, Ala., on Saturday, Nov. 13, 2010. (Messenger Staff Photo/Thomas Graning)

In what has become an annual tradition, the Troy Trojans football program has sent another player into the National Football League.

With the 83rd selection in the third round of the 2011 NFL Draft, the New York Giants came calling for former Trojan wide receiver Jerrel Jernigan.

“I saw that New Jersey number, and sure enough it was them,” Jernigan said.

“(Head coach Tom Coughlin) was on the other end and asked if I was ready to be a Giant and I said ‘yes sir’”.

When his four-year playing career at Troy was over with, there were several long-standing records that were broken.

Multiple mock drafts around the internet had Jernigan being drafted as early as the first round and in the middle of the second round.

And even though he said it was a difficult wait, it was one that was worth it in the end.

“All that matters right now is that I got drafted,” he said.

“I am looking forward to coming in and helping the Giants offensively and on special teams. To be a part of a team that already has great players and super stars is a great feeling. Eli Manning is going to be throwing me the ball – I can’t wait.”

Jernigan will be joining two former Trojans in New York, as both Lawrence Tynes and Osi Umenyiora are already members of the Giants.

“I talked to Lawrence at coach (Larry) Blakeney’s dinner a couple of weeks ago,” Jernigan said. “We had a good talk with each other and I will probably be giving him a call later on (Friday night).

With the selection, the wide receiver will be moving from the easy-going mentality of Troy, to the city that never sleeps.

“I am looking forward to living in New York City,” the Eufaula-native said with a laugh. “It’s going to be different for sure, but it’s going to be a lot of fun. I can’t live in Alabama my entire life.”

While the draft signified the end of the Jernigan’s career at Troy, his former head coach said this was a proud moment for not only him, but for all of Troy.

“He is most deserving of this opportunity,” Blakeney said Friday night.

“Jerrel has always responded to a challenge. He has always been a great guy to play good against the best teams and come back from injury fast. I love that fact that Lawrence and Osi will be there to help and mentor him out up there.

In front of a record crowd of 1,351 at the Troy Softall Complex, the Trojans fell to Alabama Tuesday night,... read more