Pats advance into second round 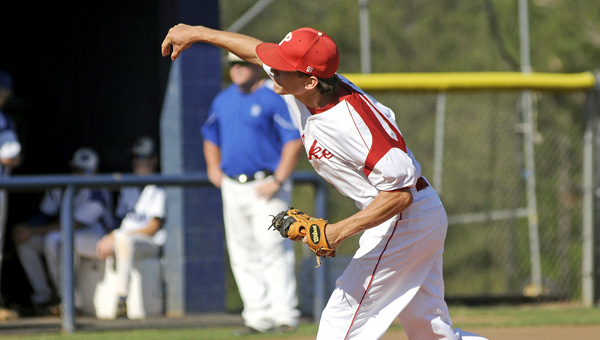 One series down, just two more to go.

While it took just two games for the Pike Liberal Arts Patriots to advance to the second round of the AISA AAA playoffs, both games were polar opposites of one another.

The Patriots ousted Wilcox Academy by the scores of 17-5 in five innings and 10-5, but it was the clinching game that left head coach Butch Austin ‘disappointed’ as he walked off the field.

“We got the win, but we did not play as well as we can,” the coach said afterwards.

“We played very down to Earth (in the second game), made way too many mistakes on the bases and in the field. We didn’t play our type ball and when we don’t do that – it shows.”

In the night-capper, three PLAS pitchers walked 10 batters, while striking out just nine, in seven innings.

The Patriots’ bats however, were able to pick up their comrades on the mound.

The team in red, while and blue finished with 15 hits in game two, including a big three-run home run from Sam Carroll.

In game one, PLAS used the long ball to help propel themselves to a victory.

Robert Benton, Floyd, Stewart and McLaughlin all went deep, as McLaughlin’s two-run homer got his team on the scoreboard in the first inning and his grand slam helped build an even bigger lead in the third inning.

“I got a little lucky (on the first home run),” McLaughlin said with a laugh.

“(The grand slam) was on a much better swing.

That third inning, was a big one for the home team, as 15 batters came to the plate with nine crossing the plate.

Tatum Barnes, Avant and Benton all drove in runs thanks to a double and back-to-back singles.

Stewart was on the mound for the first time in almost two weeks, and despite playing with an illness, had a strong outing.

The junior tossed four innings, striking out six while giving up just one run off of three hits.

“Being as Lawson was sick, I think he pitched well,” Austin said after game one.

“He wanted to pitch and I thought he did well.”

It was not until the fifth, and final inning, that the Wildcats were able to chip away at the lead, scoring five runs off of Josh Starling and Dustin Newman.

“We had a hard time throwing strikes,” Austin said.

“There were a lot of waist-level pitches and they hit them pretty well. It’s nothing we can’t fix in practice though.”

Every Patriot reached base safely either by a hit or a walk, as the team finished with 12 hits.

Stewart went 3-for-3 with two doubles and a three-run homer.

Even with the two victories in hand, several PLAS players said they know that are going to have to play better if they want to win a championship.

“I’m just kind of glad we got the win,” Stewart said, “we played flat though.

“I think we sort of over looked (Wilcox) after the first game. We didn’t play our best. That can’t happen in the second round.”

The PLAS pitching was the biggest story. In the double-header, six Patriot pitchers combined to walk 15 batters, gave up 10 runs, eight earned, off of 10 hits, while striking out 15 in 12 innings.

“It was just one of those nights for us. We had a lot of confidence going into the second game and that may have hurt us.”