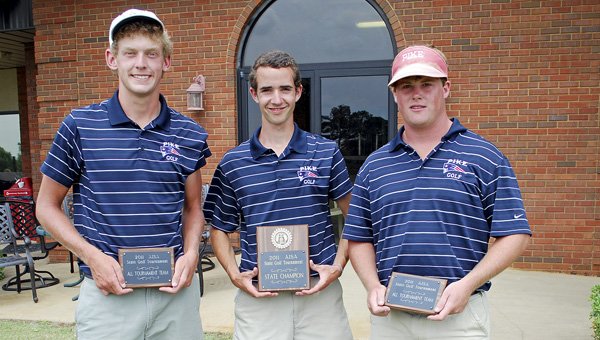 Above, Stewart Pinckard, left, Audie Stell, middle, and Ben McKeller, right, pose for a picture following the 2011 AISA State Gold Championships. Each was named to the All-Tournament team. (Photo/Greg Rossino)

Entering Tuesday’s final round at the 2011 AISA State Golf Championship, it was Lee-Scott’s Will Clowdus who had a commanding five-stroke lead over the rest of the competition.

That was until Pike Liberal Arts’ Audie Stell took the course for the last time in his high school career.

After the first 10 holes on the day, Stell was four shots under par, and had seized his own commanding lead. During the same time, Clowdus, was two shots over par and all but out of contention.

It was not until Stell was coming off the back nine that he found out what was going on.

“I was talking up the 18th fairway, and coach came up and told me that Will had just bogeyed his last hole,” Stell said.

“I had a few shots left, but that’s what’s when I knew I had pretty much won (the championship).”

The Patriot senior finished the round three shots under par, giving him a +1 over par and a 143 for the two-day tournament.

That score was good enough to beat Clowdus, who finished +3 over par and 145.

That concentration helped lead Stell to becoming the first Patriot to claim the individual title since Grant Gilbert did it two years ago.

“The first thing I thought we I won it was ‘I finally did it’,” he said with a laugh. “This was the best way I could have ended my career (at PLAS).

As for the senior’s coach, Denny Sanford, watching Stell make his way to the top of the leader board was something very special.

“What can you say? He has been a solid player for a few years,” Sanford said. “When he smells blood, he goes after it. I am really, really proud for him and his mom and dad. He had a great season.”