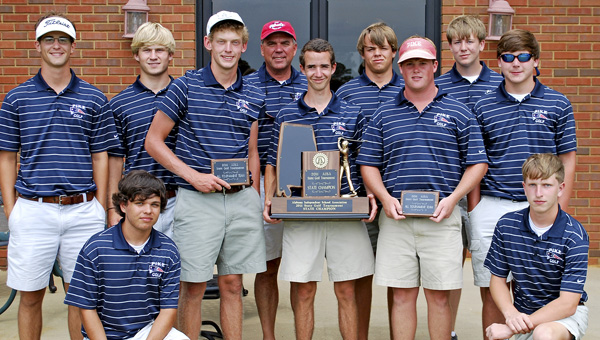 While Pike Liberal Arts may be know for its football and baseball programs, just to name few, there is another program that has become one of the most successful in the state over the last few years.

Very few sporting teams of any kind finish a season undefeated, but that is exactly what the Patriots golf team was able to accomplish.

While the hometown team went into Tuesday’s final round of the AISA State Golf Championships with an eight-stroke lead, PLAS expanded upon that early on, as it clinched its second state title in three years.

For the final round, the Patriots finished with a 305, and 620 overall.

The next closest team was last year’s champion, Lee-Scott, who shot a 320 on Tuesday, and finished 27 strokes back at 647.

“We kind of ran away from the rest of the competition,” head coach Denny Sanford said after the final round.

“I knew if our fourth and fifth guys played good, we were going to have a good chance at winning. Luckily for us, they did.”

This is the fourth state championship for the program, with the first two titles coming back in the 1970s.

“All of our guys played like they have all year – very steady,” Sanford said.

“This was a great way to end a great year.”

Leading the charge for the Patriots were Audie Stell, Stewart Pinckard and Ben McKeller, who all finished in the Top 10.

Stell was the individual winner of the championship, finishing with a 143, after shooting a -3 under on Tuesday.

Pinckard shot +7 on Tuesday, and closed out his season with a 153, while McKeller was +5 over and finished with a 154 total score over the two-day span.

With the win, McKeller became the only PLAS student-athlete to win four state championships, as the other three came with the golf and football teams.

“Both Ben and Stewart played like they always have,” Sanford said.

“Everyone has a lot to be proud of after this tournament.”

All three golfers were named to the All-Tournament Team.

Martin Meeks finished his golfing career as a Patriot shooting a 173, after finishing +31, which was also the same score as Will Sanford.

Marcus Stephens rounded out the PLAS team with his 190 score, shooting a +48.

In the end, that collective group effort was good enough to do something that has not been done in almost four decades.

“And as far as I know, there was only one other team to do that, back in the 70s. I thought we had a good enough team to win it all last year, but it didn’t work out. But, this season has been fun. They know how to win and they are all competitors.”

It was that competition nature and desire to win another title that pushed the 2011 team to an undefeated state championship season, in Sanford’s mind.

“With last season’s team, we had won it the year before and I think the guys thought it was going to be easy to win it again,” he said.

“But you have to work hard, no matter the sport. A couple of weeks ago, we all met together and I told them that we could finish like we did last season or we could work hard and be celebrating (on Tuesday). I don’t think anyone is sad right now.”