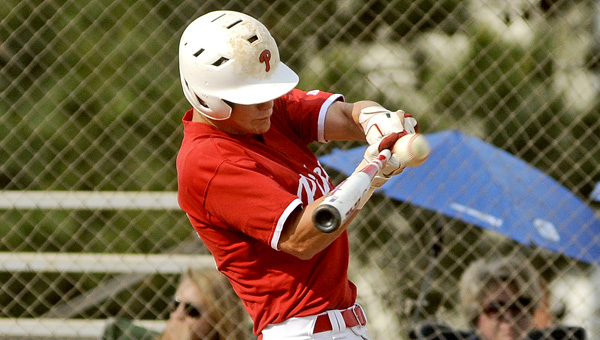 It has been a one sided fight each of the last four times Pike Liberal Arts and Glenwood have met on the diamond.

While the Gators have been able to celebrate several wins against the Patriots recently, that was not the case Thursday afternoon at Butch Austin Field.

For when it was all said and done, it was the Patriots who were the ones celebrating a region championship thanks to a nail-biting, 11-10 victory.

“I’m so proud of these kids, this team, for what they have done this season. What more can I say.”

The road to Montgomery and the state championship games will once again go through Troy, as the win secured the second-straight region title for PLAS, as well as the No. 1 overall seed.

But before the Patriots were celebrating, they had to put away a team that had beaten them more times then anyone else in the last three seasons.

And for a while, it looked as if it was going to easy, as a one of PLAS’ signature big-run innings but the home team up big early.

After taking a 3-1 lead into the third inning, the Patriots’ bats busted out, as Tatum Barnes got things going with his third home run of the season.

From there, PLAS would bat around in the inning, sending 12 batters to the plate, with six reaching base on a hit and three reaching on walks.

Both Chandler Avant and Blake Floyd had RBI-singles, while Nick McLaughlin and Lawson Stewart drove in a run a piece thanks to a double and a bases loaded walk, respectively.

“That inning got everything started for us,” Barnes said about the third inning.

“This is a huge win. I think before some of us were doubting we could beat them but this game really put us over the top.”

But even with a 9-1 lead in hand, Glenwood would not go down quietly.

In the following four innings, the Gators would out score the Patriots 9-2.

Both of the Patriot runs came in the bottom of the fifth when Sam Carroll hit a home run and a Josh Starling sacrifice fly brought home Stewart.

That final run would prove to be the difference in the game.

The big blow for the visitors came in the top of the sixth inning. Glenwood had already scored two runs, and with two outs, and one swing of the bat, Chase Silvani hit a three-run home run that cut the lead to 11-10 and knocked starting pitcher, Carroll, out of the game.

Floyd would take the mound the rest of the way, and help stop the bleeding, as he would give up just one hit to seal the victory.

The Patriots finished with 11 hits on the day. Floyd was 3-for-5 with two RBIs and two runs, while Stewart finished 2-for-3 with two RBIs.

Avant was 2-for-4 with three runs scored and an RBI.

As for Carroll, the senior pitched five and two-thirds innings, striking out three, while up eight-earned runs off of nine hits.

“I thought I pitched pretty awful,” he said with a laugh. “I tried to give everything I had, I was pretty tired in the sixth inning.

“All that matters is we beat them. We still got some stuff to work on – but it feels good.”