Region title on the line for Pats 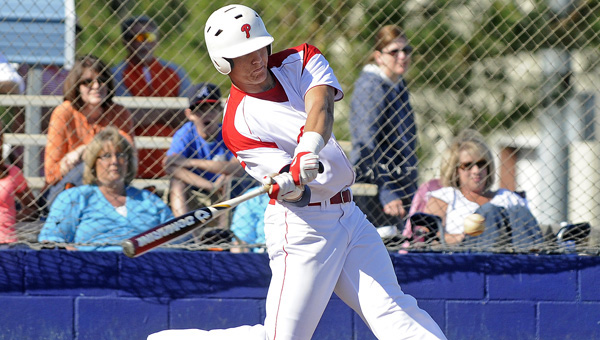 Nick McLaughlin swings at a pitch during a Patriot game. Against Edgewood on Tuesday afternoon, McLaughlin broke the Pike Liberal Arts single-season record for home runs when hit his 13th of the season.

There will be a lot more on the line today then just revenge at Butch Austin Field.

For the third time this season, Pike Liberal Arts and Glenwood will face off on the diamond.

This will be the first time the Patriots will have officially played host to the Gators however, as the first game was held at Riddle Pace Field.

Even though Glenwood has bested the team in red, white and blue twice already this season it’s the third and final game that means everything.

The winner of this game will claim the right to be called region champion and clinch a No. 1 seed for next week’s playoffs.

To some, that may be too much to handle for just one game.

But according to Patriots’ head coach Butch Austin that is just the way his players like it.

“This is the big deal right here,” Austin said about today’s game.

“I was telling coach (Bob) Pickett, this is probably the biggest game we have had over here since 1996. Our guys are chomping at the bits right now – they are ready.”

The matchup will feature two of the top three teams in the state AISA rankings as Glenwood is currently No. 1 with a 37-3 record while PLAS is No. 3 with a 30-6 overall record.

“This is a real big game for us,” Nick McLaughlin said. “We are focused, and ready to go.”

On Tuesday afternoon, the junior center fielder broke a new school single-season record when he hit his 13th home run of the season.

“I didn’t even really know about it till (teammate Andrew Quincey) told me what had just happened,” he said with a smile. “It’s a nice accomplishment, but I much rather get a win over Glenwood.”

This will be the seventh time in two seasons the teams have played against each other, with the Gators holding a 4-2 advantage going in.

A player who has played a big part in each of the games is senior Sam Carroll, whose only loss on the season so far came to Glenwood back in the season opener.

“That game is something that I remembered all season long,” the right-hander said.

“There is going to be some pressure on me to do the best that I can out there. But I feel like as long as I stay relaxed and focused, things are going to be alright.”

Being relaxed at Butch Austin Field is exactly what the Patriots have been over the past couple of years, as the team has not dropped a home game in two seasons.

Another home victory would not only extend that winning streak, but would also secure a second-straight region title.

“You never want to lose at home,” senior Evan Strother said. “We have a pretty good streak going right now so we would like to continue that.”

While the Patriots may have struggled against the Gators, dropping the last four meetings, there is no doubt in many of the player’s minds that this has become one of the best rivalries in the state.

“There is a line of friction between these two teams,” catcher Blake Floyd said.