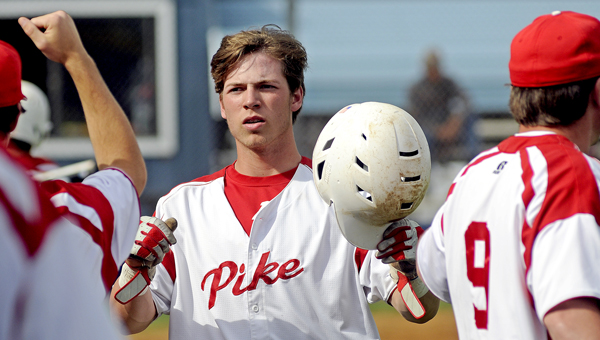 More than any other team in the AISA, the Glenwood Academy Gators have had Pike Liberal Art’s number the last couple of times the two teams have met.

That trend was continued earlier this week as the two teams met up on Tuesday in Phenix City, with the Gators taking a 12-7 victory.

That win was significant for several reasons.

It snapped a 12-game Patriot winning streak and held PLAS under 10 runs for the first time in almost a month.

More importantly, the Gators and the Patriots are now tied in region play with a 10-1 record.

In the five-run loss, PLAS aided its region foe with six errors and eight walks, despite out hitting Glenwood eight to six.

But there was more at work then just the play in the field, according to head coach Butch Austin.

“There were a lot of physical errors and several mental errors. I don’t know what you call it, but I sure did not like it. But we have to take care of business now.”

Both teams have five remaining games on the schedule, three of which in region play, before meeting in the season finale at Butch Austin Field.

If both win out, that game, on April 21, will be for the No. 1 seed in the playoffs and the region championship.

Since beating the Gators twice in last year’s regular season, the Patriots have dropped four-straight to Glenwood.

“When you are playing one of the best teams in the region, you have got to play good, and we didn’t,” Austin said.

“In big games, everything is magnified. We had far too many errors and walks and it’s just magnified 10,000 times. It definitely gives us something to work on.”

Even though a playoff sport was locked up over the weekend, there is still zero room for error if the Patriots want to repeat as region champs.

And now, the team must transition from a painful loss to another difficult region opponent, as Lee-Scott comes into town today.

In that game, senior Sam Carroll took the mound. While he said he was not pleased with his performance in that game, he is going to get his shot at redemption this afternoon on the mound.

“I’m going to try to do everything differently,” Carroll said with a smile, “It all starts with me throwing strikes.

“We have to win out now to take first. In a way, having to do that could be good for us. But it all starts (Thursday) – and we have to play well.”

Carroll is currently 6-1, with over 50 strikeouts on the season. His only loss of the year came in the season opener – against Glenwood.

The Warriors will come into the game with an 11-14 overall record, and 4-4 in region play.

Those statistics are not what the Patriots are focused on however.

“We are still fine, I think,” senior Evan Strother said. “We know what we have to do and our heads on straight.

“It just comes down to playing our game and not worrying about anything else. Every game at this point is a must win – and it starts (Thursday).”

Leading the charge offensively for the Patriots are Carroll, Nick McLaughlin, Chandler Avant and Blake Floyd.

Each have five or more home runs and all have driven in over 30 runs.

Even though the offense has been one of the team’s strong points all season, it’s the defense that will have to be sured up to help get the Patriots where they want to go in the end.

“I think we have been hitting the ball pretty well lately,” McLaughlin said. “And we didn’t do bad against Glenwood.

“But we can’t make errors like we did on Tuesday. We have to be able to execute in the field. Errors have hurt us this season.”

PLAS will play host to the Warriors today at 3:30 p.m. at Butch Austin Field.

“I think everyone is proud of the season that we have had to this point,” Josh Starling said.

“We have put the Glenwood loss behind us. We have Lee-Scott next and we are focused on playing as good as we can to get another win.”