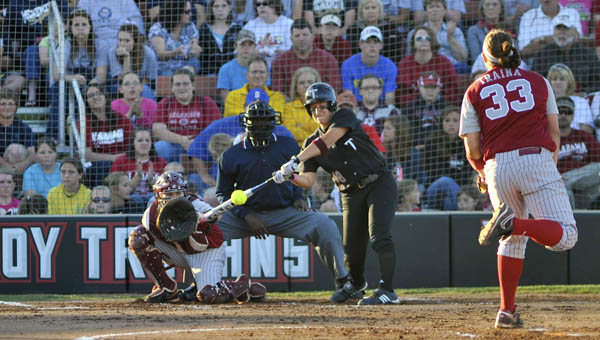 In front of a record crowd of 1,351 at the Troy Softall Complex, the Trojans fell to Alabama Tuesday night, 5-2. The Trojans finished with just four hits in the games, two of which came from Hayden Gann. Photo/ Kevin Glackmeyer

A record crowd was on hand to watch the Trojan softball team take on the No. 5 ranked Crimson Tide of Alabama Tuesday night.

And while the game started off on a fast pace offensively, pitching dominated the remaining six innings – which was not a good sign for Troy.

Behind the arm of Jackie Traina the Crimson Tide were able to hold on to a early slim lead, before cruising to a 5-2 victory over the Trojans at the Troy Softball Complex.

At one point, the Alabama hurler retired 16-straight Troy batters, as she finished with eight strikeouts and only allowed two runs off of four hits.

“I was real pleased with how they competed all night long,” Melanie Davis said afterwards.

“We gave up three runs in the first inning to a really good hitting team and that could have set the tone for a not so good outing, but our kids answered back right away.”

In Alabama’s first at-bat, the Tide struck first, thanks to Kayla Braud lead off single.

Two batters later, the single would come around to bite Troy as Braud would score on a Whitney Larsen sacrifice fly.

Alabama was not done yet.

With a runner on, and two outs, Cassie Reilly-Boccia hit a home run over the left field wall to put her team up 3-0.

Troy would answer back in their half of the first, thanks to three-straight hits by Nikki Hollett, Hayden Gann and Sarah Harris.

After a Hollett double, Gann would hit a double of her own to drive in the run and Harris followed suite with an RBI single.

That would be the last time the Trojans would get on base until the sixth inning, as Traina would settle in.

Gann would get her second hit of the night in the bottom of the sixth inning, however the Trojans were unable to produce another run.

“I don’t think we were intimated by any means,” Gann said.

“We have played some of the top teams already this season and held out own. We wanted to be competitive and really give ourselves a chance against (Alabama). We wanted to win for sure, but you have to take baby steps with a team like Alabama.”

In all, there were 1,351 in attendance Tuesday night, breaking the old record of 1,052 which was set the last time the Trojans played host to Alabama.

“We competed the whole game,” Taylor Smartt said. “We never thought we were dead.

“If anything, we were more ready to play this game then any conference game.”

The loss drops the Trojans to 25-19 overall, while the Crimson Tide improved to 38-5. Ashlyn Williams pitched a complete game for Troy, striking out 10 while allowing five runs off of 12 hits.

“We competed hard, did the best we could,” Smartt said. “Now, we have to take that with us into conference play this weekend against a good FIU team.”