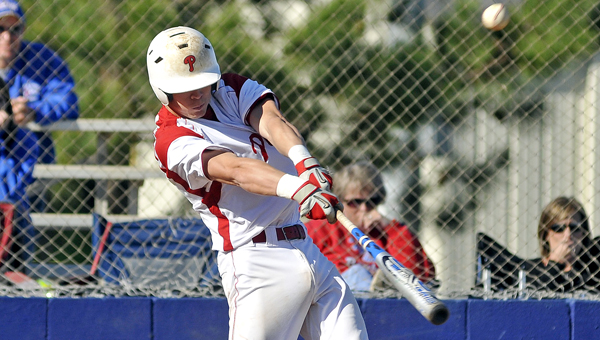 For the second time this season, the Pike Liberal Arts Patriots have a winning streak that has extended into the double-digits.

This coming after a road double-header sweep of region foe Hooper Saturday afternoon and an equally impressive 14-1 win Monday afternoon, at home, against Abbeville Christian.

Monday’s victory over the Generals was the 12-straight win, and improved the No. 3 team in the AISA to 28-3 on the season.

“This team’s chemistry is better then it has been all year,” Chandler Avant said. “But we need to keep going – there is no room for error right now.”

The weekend two wins, 10-6 and 13-3, helped improve the Patriots to 10-0 in region play and in the process, clinched a berth in the postseason.

Just two days later, PLAS was on the field again, and the offense continued to produce.

Against Abbeville Christian, the Patriots batted around in the first inning, sending 11 batters to the plate while scoring seven runs.

Robert Benton, Josh Starling and Lawson Stewart all had RBIs, as Benton hit a two-run double, Starling knocked in a run with a single to center and Stewart drew a bases loaded walk.

That would be all Benton, the PLAS starting pitcher, would need.

The sophomore threw three innings, striking out five while just giving up one hit.

“I thought I pitched pretty well,” Benton said of his second career start. “It was good to get the win and I thought we played pretty well.”

The big blow would come in the fourth inning, when the Patriots scored six runs against the Generals.

Starling put his team up 10-0 thanks to a two-out fly ball to left field that was dropped.

The lone Generals’ run was unearned and came in the top of the fifth on a pass ball.

After the victory, the team had one thing on their mind – its next opponent.

For the first time since the season opener, the Patriots will be taking on the Glenwood Gators, in another attempt for PLAS to seek revenge not only for its first loss of the season, but also for last year’s state title defeat.

“A win against Glenwood would mean a lot,” Starling said.

“We have already got a playoff spot, but to beat them, at their place to clinch the No. 1 spot (in the playoffs) would be even bigger – we want to send them a message.”

The matchup will pit two Top 5 teams in the state against each other, as Glenwood is currently No. 2 with a 29-3 record.

The Gators have lost just once in region play this season, and are currently riding a three-game winning streak against the Patriots, dating back to last year.

In the season opener this season, Glenwood took out PLAS 9-1 at Riddle Pace Field.

“I think we are ready,” Blake Floyd said, “it’s the biggest game of the season to this point right now.

“Every single one of us is fired up for this game. We want the opportunity to get some revenge against those guys.”

First pitch for the region battle is set for 3:30 p.m., in Phenix City.

“Honestly, I don’t think there is anything that would make us happier then to beat them on their home field. Knowing that we are going to be on the road for that game has fired us up even more. It’s going to be a playoff-type atmosphere. I have all the confidence in the world in my teammates – it’s going to be a battle.”