Patriots pick up each other, victory 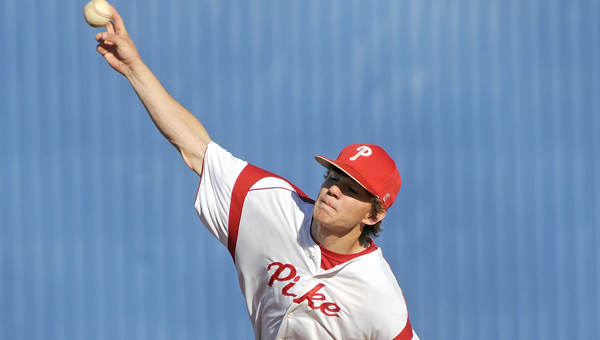 For a good bit of Tuesday afternoon’s game between Pike Liberal Arts and Macon-East, it appeared the game would go all seven innings.

That until the Patriots had another one of their patented big innings.

Even though that inning came later than usual, the Knights were still sent back home to Montgomery early, thanks to another double-digits PLAS victory.

The Patriots’ 12-2 win in five innings improves the team to 24-3 overall, and continues an eight-game winning streak.

While the win may look similar to recent victories, it was Tuesday’s win that made head coach Butch Austin particularly proud of his group.

“We had some guys that didn’t hit well (Tuesday) but others picked them right up with their own hits,” the coach said. “And that’s great to see.

“I’m proud of the way we are playing. Even if some of our good hitters are struggling, there are going to be guys in the lineup that still get those big hits.”

Even though both Blake Floyd and Nick McLaughlin went a combined 2-for-6, it was Sam Carroll who picked up his teammates, finishing 2-for-2 with a home run, three RBIs and scored four runs.

Robert Benton also had a solid day at the plate, going 2-for-4, with a two-RBI double.

While the Patriots scored five runs in the fifth, the four innings leading up to that were relatively quiet.

On the mound for the Knights was Gage Pregno, and early on, he had the home team bats fooled.

In both the second and third innings, the Patriots had the bases loaded, with one out, however neither time a runner came across the plate.

“The played us pretty close early on,” Strother said.

“Our bats came on as the game went on though. We are playing pretty good ball right now. I think everyone is seeing the ball well. And if they are not, everyone is picking them up and helping out.”

This was the second time in a week the Patriots had beaten the Knights.

“I think right now, we are hitting the ball really well, we have played good defense and we are getting good pitching,” Austin said.

“When you get all three of those things together, you are going to be pretty good. Our guys expect to win every time they play.”

As for the aforementioned pitching, Lawson Stewart took the mound for PLAS on Tuesday.

The junior continued to stay perfect on the season, winning his sixth game of the year, as he struck out nine, giving up just five hits and two runs.

I don’t think Lawson had his real stuff (Tuesday), and he would tell you the same thing,” Austin said. “But he won and got through the game without his good stuff, he pitched well.”

PLAS will be in action on the road for the rest of the week, taking on Autauga Academy and Hooper Academy on Thursday and Saturday.

“Everything is just clicking for us right now,” Josh Starling said.

“The dugout is filled with a lot of motivation and excitement. It’s a great atmosphere to be around all the time.”