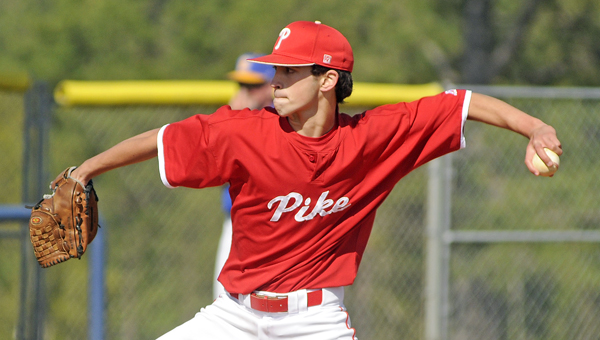 In 2010, the Pike Liberal Arts Patriots set a new school record for most wins in a season with 30.

A year later, the baseball team is again chasing the record books.

Coming into Thursday afternoon’s game against Emmanuel Christian Academy, the Patriots had an overall record of 20-3.

Less than an hour and a half after the first pitch was thrown, PLAS had recorded its 21st win of the season, thanks to a 15-0 victory over the Warriors in four innings.

No matter how many wins his team may have, all Patriots’ head coach Butch Austin cares about is making sure his team plays well enough to get those victories.

“A wins, a win,” Austin said with a smile after the game.

The Patriots were able to get the latest win thanks to some of its lesser known players as every starter, with the exception of Chandler Avant and Tatum Barnes, played the role of cheerleaders for the reserve players in the field.

But that did not stop PLAS from doing what it does best – scoring runs.

“It felt pretty good to hit that,” the sophomore said.

From there, six other Patriots would drive in runs, as PLAS would score one run in the second, five in the third and four in the fourth before the game was called.

“The younger guys practice out here every day just like the older guys,” Austin said. “And they needed to play.

“They wanted to play and I’m glad we got the opportunity to play them. They did alright.”

“It felt pretty good to start and contribute to a big win like this,” Dickey said.

“I have played in a few games already this season, but this had a different feel to it – it was fun.”

On the mound in his first start of the season for PLAS was sophomore Aaron Milner.

In his debut, Milner threw a complete game, striking out five while allowing just one hit and walking three.

“He wanted to pitch and I think we needed to give him some time on the mound.”

As for the pitcher himself, Milner thought he threw a pretty good game.

“My arm was kind of getting weak towards the end, but overall, I thought I did alright. I thought it was adequate.”

Today, the Patriots will again be in action at home, as it plays host to region foe Monroe Academy.