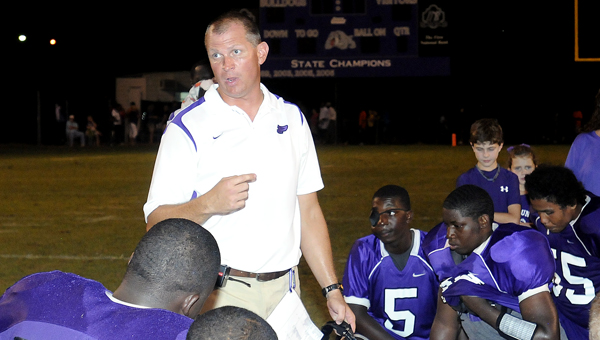 And the search continues.

It’s been two weeks since Pike County High School, and it’s fans, were shocked to find out that now former head coach Robert Johnson had resigned from his position at the school for the same position at Tuscaloosa Academy.

Since that day, Dr. Mark Bazzell, superintendent for Pike County Schools, has been on the lookout for the next Bulldogs’ head football coach as well as a long-term math teacher, Johnson’s other position at the school.

Despite the dilemma the short notice resignation presented, Bazzell said over 50 applicants have experienced interest in the job.

Right now, the high school has a substitute filling in Johnson’s role and the school is actively searching for a certified teacher to be a long-term sub for the remainder of the year.

It was last week at the Pike County Board of Education meeting that Bazzell recommended the immediate termination of Johnson as the PCHS athletic director and head football coach, but not as a teacher at the school.

“The Alabama law is pretty clear on what a person’s obligations are in terms of their teaching contract and what is required to get out of a contract,” Bazzell said Tuesday afternoon.

“When people don’t do that, we will write the State Superintendent and at that point, it’s his decision what to do about it. It’s left us in a real tight position though.”

Bazzell said he has not heard from Johnson since his resignation.

“Our goal is to move forward,” he said.

“We want to secure a long-term certified teacher to do the math instruction and to take care of those academic classes first and foremost. We are advertising for the athletic position and football coach as well.”

With the departure of the coach, the Bulldogs will be looking for its fifth head coach in as many years.

Since 2007, Wayne Grant, Brad Waggoner, Eddie Stephenson and Johnson have all held the position.

Only Grant and Stephenson had a winning record, but all four coaches led the team to the postseason.

Bazzell said he has received a few e-mails from members of the community voicing their opinions about who they would like to see lead the Bulldogs, but did not comment on who the coaching suggestions were.

But in the week’s time that the job listing has been posted, Bazzell has received more than a few applications.

The superintendent said as of Tuesday afternoon, he has received 53 applications for the head coaching vacancy since posting the job opening on March 22.

While Bazzell said he was not going to make any comments on the process or the candidates, he said the listing would be taken down on April 4, with the reviewing process of the applicants set to begin on April 11.

Bazzell continued by adding that he would like to hire Johnson’s replacement by Monday, April 18, following the school’s spring break.

“As we have always done, we will select a candidate who we feel is the best person to lead that program forward,” he said.

“There is not going to be a shortage of qualified applicants and about a third of the ones we have received have previous head coaching experience. There won’t ever be a shortage of candidates interested for that position, what with the tradition that program has.”

The number of candidates applying for the job this time around has already exceeded the school’s search for a successor to Eddie Stephenson back in early 2010.

“We are going to review all the applicants very close,” Bazzell said.

“We are going to look at the kind of experience the people have had and at some point, we will sit down and narrow the field down and start to interview.”

Patriots improve to 5-0 in region play