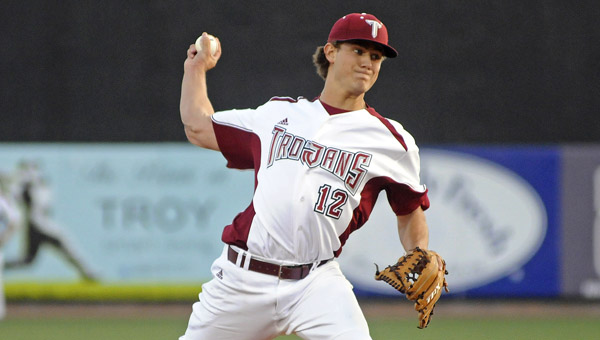 Riddle-Pace Field was the site of the 2011 version of the Trojan War, as Troy and Arkansas-Little Rock both were looking to keep good starts going in Sun Belt play.

After nine innings were in the books, its what happened in the first inning that carried the most weight, as Troy was able to propel itself to a 3-0 lead early before going on to win 6-2.

It was the work put in at the plate earlier this week that helped the Trojans get off to a fast start Friday night, according to head coach Bobby Pierce.

“Well, we had done a lot of work during the week on getting big hits, getting the ball off the bat,” the Trojan skipper said. “Boy, did the first inning look great. We came right out of the gate swinging.

“But we hit a lull there for the rest of the game. But as it turned out, the first inning was the difference in the game.”

In that first inning, three-straight singles by Tyler Hannah, Blake Martz and Logan Pierce helped get the first Trojan run on the scoreboard and a standup triple by Drew Prichard brought in two more.

In the seventh inning, Troy got a little bit more breathing room thanks to an Adam Bryant two-run home run, to make the score 6-1.

On the mound for the Trojans was Tyler Ray, who was making his first appearance since leaving last Friday’s game after hitting hit by a ball in ankle.

And despite giving up sporadic hits through his 6.1 innings, Ray was solid, giving up just one run, off of eight hits while striking out four.

“I was real happy to see Tyler come back with a strong performance after being injured last week,” Pierce said. “I thought he looked pretty good out there.”

Ray was taken out in the seventh inning with just one out and the bases loaded in a 4-1 game.

Garrett McHenry came in and shut UALR down, striking out both the batters he faced and got his Trojans out of the jam.

An inning later, again the opposing Trojans would be set to strike.

Nick Rountree led the eighth inning off with a home run over the left field wall off of McHenry to cut the lead to 6-2. McHenry would then load the bases, but his replacement, Tyler Workman, would take care of business just as McHenry did the inning before him,

UALR would not capitalize off the opportunity, and went down in order in the ninth to help Troy improve to 3-1 in conference play.

“Garrett coming in and getting the two strikeouts with the bases loaded was huge for us,” Pierce said.

“But as you can see, when your focus leaves a little bit after the big moment, you have to be able to regain it. He was able to regroup himself a little bit, which helped us out.”

Troy will look to win the series today, with a first pitch set for 6 p.m.