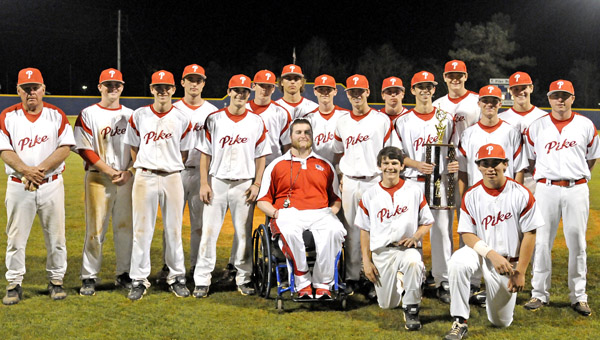 It took the Pike Liberal Arts Patriots just 17 innings to continue on a streak the program has had going on for over a decade now.

The annual Jonah McWaters Tournament is one the Patriots have yet to lose in and over the weekend the team wasted little time in making sure the trophy stayed on the school’s campus.

In the championship game on Saturday night, PLAS demolished Northside Methodist, 17-2 in three innings, to claim the tournament once again.

This was the second time the two teams had met on the day, with the first game also ending shorter than usual thanks to the 10-run rule.

That was a common theme for games featuring the Patriots.

In four games, PLAS outscored its three opponents 61-7, with none of those games extending past the sixth inning.

Both South Montgomery and Tuscaloosa Academy also fell victim to the Patriots in the three-day tournament.

“First off, I just want to thank everyone that worked this tournament,” head coach Butch Austin said after the championship win Saturday night.

“This was the best tournament we have ever had, and I want to thank everyone that helped make it possible.”

There were three Patriots honored for their efforts in the tournament, as senior Sam Carroll was named Tournament Most Valuable Player while Nick McLaughlin and Robert Benton were named to the all Tournament team.

“We came in this game looking for the win and we took care of business.”

This was the second-straight year Carroll was named the MVP.

And with good reason

The senior finished 5-for-7 in the tournament, with four home runs, two of which were grand slams, and 12 RBIs.

McLaughlin did not finish far behind him, as the junior had a huge weekend at the plate, specifically in Saturday’s afternoon game.

McLaughlin finished 3-3 with two home runs and a grand slam and seven RBIs.

When it was all said and one, McLaughlin finished 7-for-10 at the plate with four home runs, including one grand slam, and 13 RBIs.

Joining those two in the home run parade was Benton, who it two and finished 6-for-7 with seven RBIs, Chandler Avant and Tatum Barnes, who both went deep for the first time this season.

“The ball looked pretty big,” McLaughlin said over the weekend about his three-home run game.

“I wasn’t trying to hit home runs – I was hoping to hit them out of here, no doubt. But really I was just trying to get a base hit.”

While the Patriots were hitting, the opposition was not. Four PLAS pitchers, Josh Starling, Lawson Stewart, Blake Floyd and Carroll, combined to allow just 10 hits in four games, while striking out 29.

PLAS combined for 35 hits and have now extended its winning streak to 16 games.

The only loss the Patriots have suffered came against Glenwood in the season opener.

“Everyone is seeing the ball well, everyone is focused,” Strother said after the title victory.

“Everybody contributed in this game. But we are looking to get better every day. Hopefully, we are going to be able to feed of this win.”

The team will get some time off this week thanks to the school’s Spring Break, however, this weekend, the team will be back in action in the Tuscaloosa Academy Tournament.

“We got the win and we won the tournament. I think we are playing as good as we can play right now – I hate to see Spring Break coming,” Austin said with a laugh.