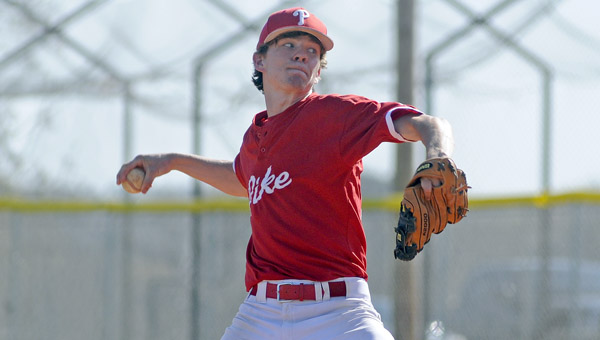 Thursday night, Pike Liberal Arts was able to run to a double-digit victory despite a lack of hits.

Less than 24 hours after the Jonah McWaters Tournament nightcap concluded, the Patriots were back on the field Friday afternoon.

And this time around, the team playing host to the annual tournament made their presence felt loud and clear at the plate.

The Knights of Tuscaloosa Academy won the right to present themselves as the next challenge for the Patriots, thanks to a 10-0 win over Dixie in the opening round.

However, as it turned out, it was not much of a challenge at all, as PLAS stroked its way to a 15-2 victory in five innings

“I don’t really know what the difference was in how we played Thursday and how we played (on Friday),” head coach Butch Austin said.

“But we played a complete game (on Friday) it was really good to see our guys hitting the way we were.”

When it was all said and done, the Patriots finished with 15 hits, 10 of which were for extra bases.

Three of those hits took the balls out of the ballpark.

Chandler Avant and Sam Carroll both hit their first and second home runs of the season, and for the second consecutive game, Robert Benton went yard, hitting another ball over the blue monster of Butch Austin Field.

“We saw a lot better pitching (Friday) then on Thursday and I think that made all the difference for us. Everyone really hit the ball well. Things are coming pretty easy for this team right now because we are working hard and coming together.”

In the last two games, Benton has gone 5-for-6 with two home runs, three singles, a walk and four RBIs.

As for the rest of the Patriots, nearly every batter reached base. Both Avant and Blake Floyd finished 2-4 with an RBI, while Nick McLaughlin, Sam Carroll and Lawson Stewart combined to go 5-for-7 at the plate, driving in four RBIs.

The Patriots scored in every inning with the exception of the fifth.

The first three runs came off of two Knight wild pitches and a balk, with the fourth coming off the bat of Benton for an RBI-single.

In the second inning, PLAS put six across the plate to take a 10-0 lead.

That would be more than enough support for Patriot starting pitcher, Stewart.

Like his teammate, Josh Starling did the nigh before, Stewart threw a complete game, giving up just two runs, one earned, off of two hits.

The junior also struck out eight.

“I didn’t think I had my velocity (Friday), so I was just trying to hit my spots,” Stewart said.

“I think if anything we were hitting the ball well. Tuscaloosa is a pretty good team and we did pretty well against them.”

In the first two games of the tournament, so far, two PLAS pitchers have struck out 19 batters and given up just three hits and two runs, in 10 innings of play.

Offensively, the Patriots have outscored their opponents, 27-2.

Today, the team will look to continue that trend of dominance at 12 p.m., as it will take on Crenshaw Christian, for the right to play in the tournament’s championship game.