Patriots cruise to first round victory 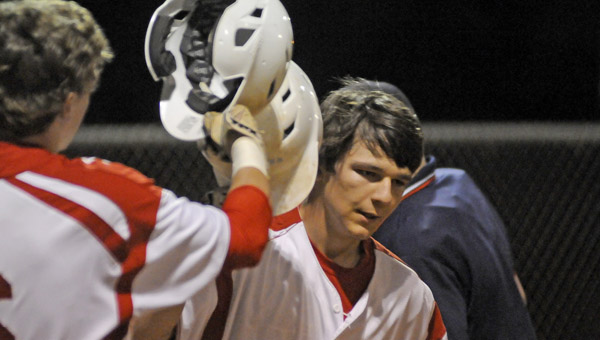 It may not have been the prettiest start to the Jonah McWaters Tournament for the Patriots, but in the end, the team playing host to the tournament got exactly what it wanted – a win.

For the second time in 10 days, Pike Liberal Arts and South Montgomery met on the diamond.

And for the second time this season, the end result was a double-digit Patriot win.

While the team may have used its bats to propel itself to victory in the first meeting, PLAS had to use it patience for the rematch, as the Patriots were walked 11 times in a 12-0 win, in five innings.

Despite the win, head coach Butch Austin believed his team could have played better offensively.

“We didn’t do anything at the plate,” Austin said.

“You have to adjust from pitch to pitch, and we didn’t do that (Thursday night).”

PLAS finished with just four hits in the game, two of which came from Robert Benton.

One of those hits will be one long remembered for Benton and his family.

In the bottom of the third inning, the third baseman came up to the plate and hit his first home run at the varsity level over the left field wall.

“I thought it was going to be a fly ball,” Benton said with a smile.

“I was really surprised when I looked over and it was gone.”

The other Patriot home run came from a more likely source, as Nick McLaughlin ended the game with a three-run homer over the right field wall to put PLAS up 12-0.

Besides a Lawson Stewart RBI single and a Tatum Barnes sacrifice fly, every other Patriot run came from Raider pass balls.

Even though, for the most part, the PLAS bats were silent on the night, the starting pitcher made a lot of noise with his performance on the mound.

Junior Josh Starling got the ball and was dominant, pitching a complete game one-hitter while striking out 11.

The first hit surrendered to SMCA was in the fourth inning.

“Not too bad,” Starling said.

“I was coming out here trying to throw strikes. I was a little disappointed with the one hit, but that doesn’t always happen. It’s a rare thing, but I am happy with how I pitched. I think I threw too many balls, but all in all, it was a good night.”

The Patriots will be back in action today at 3 p.m. against Tuscaloosa Academy.

Johnson leaves PCHS after one season