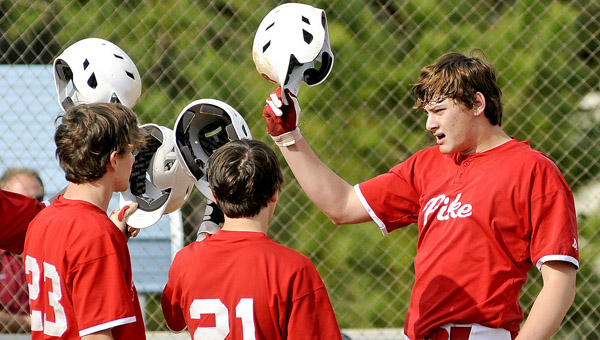 For over a decade, Pike Liberal Arts has paid its respect to former Patriot, Jonah McWaters.

Each year since the car accident that left him paralyzed, the school has held baseball and softball tournaments in his honor.

And every single time, it has been the boys in red, white and blue on the diamond that have come out on top.

Not once have the Patriots not be crowned champions of their tournament, and starting today, the team will look to keep that status in check.

On Wednesday, the Patriots were found on Butch Austin Field in good spirits as the team worked on its infield defense and got some reps in the batting cages.

In between the sound sounds of balls hitting gloves and bats, one could hear jokes and laughter.

And with good reason, for PLAS has had much to smile about recently.

The Patriots are currently on a 12-game winning streak, dating all the back to Feb. 21.

Even though the team has struggled defensively in the last couple of games, highlighted by a five-error game against Morgan Academy, PLAS has had a few days to sure up its infield, just in time for the tournament.

“We have some good practices this week,” head coach Butch Austin said. “Tuesday was the best practice we have had in two weeks.

“We worked on our fundamentals (on Tuesday), we fixed up our defense. I think we are looking all right, right now.”

Up first for the Patriots in the tournament is a team it has already seen one time this season in South Montgomery.

Despite the lopsided victory a couple weeks ago, the Patriots are going into the first round action focused on the task at hand.

“We are going to treat this just like any other game,” junior Nick McLaughlin said.

“This team is coming together pretty well right now and we have been working hard in practice. We have been good, but I think we are going to be better.”

There may not be many double-digit victories like that in the tournament however.

Of the seven teams competing in the tournament, four have winning records: PLAS, Northside Methodist, Dixie and Tuscaloosa Academy. The other three teams are Lakeside, Crenshaw Christian and South Montgomery.

“This year the tournament is going have tougher competition then in years past,” Josh Starling.

“If we want to really show that we are going to be a competitor, it is going to be big for us to come out here and win it.”

The PLAS/SMCA game will begin at 7 p.m. tomorrow, following the conclusions of the Lakeside/Northside Methodist game at 3 p.m. and the Dixie/Tuscaloosa Academy game, which will begin at 5 p.m.