Johnson leaves PCHS after one season 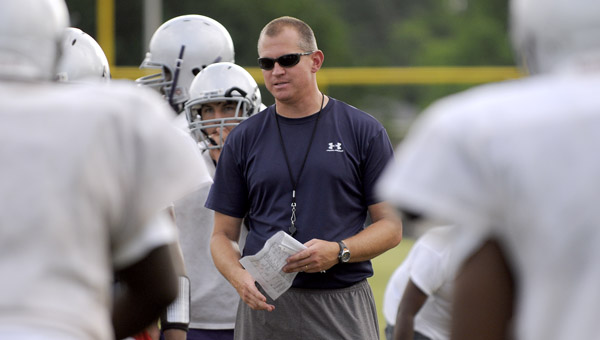 It’s the same story, just in a different year.

For the fourth-straight year, Pike County High School will be on the search for a new head coach.

Earlier this week, Robert Johnson, who was hired last February, turned in his letter of resignation, after accepting the same position at Tuscaloosa Academy.

“This was a difficult decision for me to make, but ultimately, it was the best for my family and I,” the coach said Wednesday afternoon.

Johnson said while negotiations are still on going, he would be headed to Tuscaloosa to take over as the new head coach as soon as possible.

“Tuscaloosa Academy is a great opportunity for me and my family,” the coach said.

“I really enjoyed my interview with them and I look forward to being a part of that program.”

The former Bulldog head coach did not know about his new job until Tuesday. After learning about the hire, he let both his coaches and the administration know.

The Bulldog players themselves did not hear about the coaching change until Wednesday morning.

“(Wednesday) was my first opportunity to talk to my players,” Johnson said.

In his only year as head coach at Pike County, Johnson helped lead the team to a playoff berth thanks to a 4-3 region 3A record and finished with a 5-5 overall mark.

The Bulldogs lost in the first round of the playoffs to Washington County.

As for his new team, the Knights finished with a 3-8 record this past season in AISA AAA Region 2.

Like Pike County, the Tuscaloosa Academy also lost in the first round of the playoffs.

This will be the fourth coaching stop in Johnson’s career, as he as compiled an overall record of 86-67.

His tenor with the Bulldogs was the shortest as a head coach, as he was with St. James for 10 seasons and Carroll for three.

“It was definitely a good experience,” the coach said.

“Anytime you get to meet and work with great people and meet those kids, get to work with them and see them grow is always wonderful. We had a bunch of good times and some difficult times, but the good definitely outweighs the bad, by far. I was just privileged to be their head coach.”

While Johnson handed his letter of resignation to Pike County principal Mike Hall Wednesday morning, the Pike County Board of Education will vote on it in Monday’s upcoming meeting, with the consensus being the board will approve it.

“It is kind of a surprise, especially this late in the year,” Hall said.

“We will do what we have to do and begin searching for a new head coach shortly.”

Superintendent of Pike County Schools, Dr. Mark Bazzell, could not be reached for comment on the coach’s resignation.

Johnson said there was no pressure to leave the position and that decision to leave was his alone.

“Nobody forced me out of Pike County,” he said.

“Everyone, from the administration to the fans, have been very supportive of me since day one. Hopefully, there are no hard feelings. I wish the school and the entire community the best of luck in the future. Hopefully, they will reciprocate.”