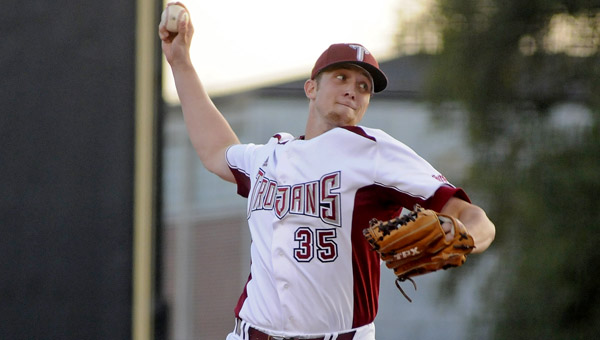 For the third time in as many weeks, the Troy Trojans were on the diamond under the lights on a Tuesday night.

For the first time this season, the Trojans were at home in the midweek game and hoping to get its first none weekend win.

That would be the case against the Florida A&M Rattlers thanks to patience at the plate and dominance on the mound, as Troy would win 15-4.

Part of the aforementioned pitching dominance came from a Troy native.

For years, William Teal dreamed of taking the mound for his hometown Trojans.

That dream became a reality on Sunday.

And under the spotlight, the Troy native shined.

Against the Rattlers, Teal struck out three, while giving up two runs off of three hits and a walk.

“I could have done better,” Teal said.

“I wasn’t expecting too, too much coming off of surgery but I was glad I was able to come out here and a do a half way decent job. I expect to do better in the future.”

The Trojan, who is coming off Tommy John Surgery on his throwing elbow, threw 52 pitches in three innings.

As for the rest of the team, Troy had a record-breaking performance at the plate in the blowout win, as 16 batters were walked.

After falling behind 1-0 in the bottom of the first, the Trojans put three on the scoreboard thanks to RBIs from Todd McRae, T.J. Rivera and Logan Pierce.

After another Rattlers run in the top of the second, Troy would again retaliate in their at bat, this time scoring four runs in the bottom of the second.

With the bases loaded, Tyler Hannah hit a bases clearing stand-up triple and Blake Martz would bring Hannah home with a sacrifice fly to make the score 7-2.

That inning broke the game wide open, as the Trojans would score in every inning but three.

“This is what we are looking for,” head coach Bobby Pierce said. “When we have runners on, we want to get them across.

“(Tuesday night) we had an awful lot of chances to get that done. It was kind of a runaway game, and that’s all right to have every now and then. I’m just glad we came out on top.”

In all, 15 different Trojans walked to the plate on Tuesday, with all but one reaching base safely against five Rattler pitchers.

As for Teal, to be in front of friends and family was not as nerve racking as pitching in a live game atmosphere for the firs time since his surgery a year ago.

“It’s not necessarily me being nervous about throwing in front of people,” he said, “I have done it all my life.

I’m still trying to get 100 percent healthy and that’s what I was most nervous about – coming back into the game. It’s been a year since I pitched to anybody, so you can’t complain there.”

In his first season, Teal finished with an ERA of 4.87 and 88 strikeouts while posting a 5-6 overall record.

His sophomore season was cut short due to shoulder surgery.

As for what Teal’s head coach, Pierce said he was pleased with how his sophomore pitched.

“Will was a little rough around the edges and we expected that with him coming off surgery. He is still trying to work on his timing and getting everything in sync. I was pleased with what I saw because I didn’t have too high of expectation, but we are going to need their help. We are trying to get him ready and he is coming along. Sooner or later, he is going to start contributing more and more when everything gets smoothed out.”