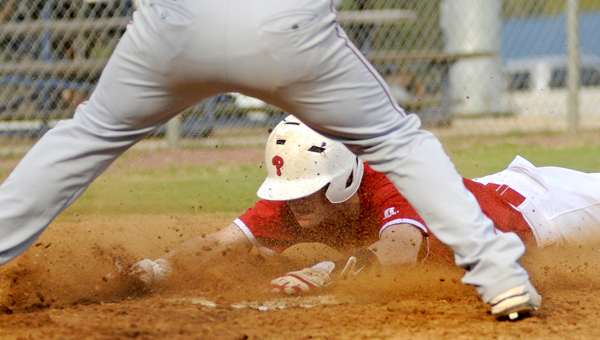 The old cliché says it’s not how you start a game, but how you finish it.

The Pike Liberal Arts Patriots can attest to the saying after Monday afternoon’s thriller against Morgan Academy.

Despite four first inning errors, which lead to an early 3-0 deficit, PLAS was able to mount a comeback to not only tie the game up in the bottom of the final inning, but also win it with one swing of the bat.

Trailing 6-5 in the bottom of the seventh inning, the Patriots had the heart of the order due up in Blake Floyd, Nick McLaughlin and Sam Carroll.

While each reached base safely, it was Lawson Stewart who wound up being the hero, thanks to a base loaded, two-RBI single to right field, bringing home both Floyd and McLaughlin and securing a 7-6 Patriots victory.

“I was looking for the first pitch,” Stewart said. “I wanted to be in the position to win the game.”

Before Stewart’s heroics, the Senators intentionally walked Carroll to load the bases and on the first pitch of his at bat, the junior second baseman made them pay.

“We had Blake Floyd, Nick McLaughlin, Sam Carroll and Lawson Stewart come up for us,” head coach Butch Austin said. “And you can’t ask for anyone better then those guys.

“When you have those guys coming up, you expect to go ahead. You expect to win. I think our guys knew that going into the final inning.”

The win was the Patriot’s 11-straight win, and second come from behind victory in a week.

Last Tuesday against Lee-Scott, PLAS scored two runs in their final at bat to send the game into extra innings before winning in 15 innings.

On the mound for the Patriots was the senior Carroll.

And despite trailing 4-0 at one point, Austin kept his No. 1 pitcher in the whole game, and Carroll responded in kind, striking out a season high 10, while allowing six runs, four of which were earned, off of just four hits.

“His curve ball was looking really good. I know he wanted to get back on the mound after last Tuesday’s game. He didn’t do that well and he wanted to get another opportunity and he pitched great (on Monday). All his pitches looked great – you can’t ask for anything better.”

It was the four errors in the first inning that lead to the early Senators lead, but like Carroll, the defense calmed down as the game went on.

“(The errors) were frustrating,” Carroll said, “but there is nothing I can do about it.

“I always went to pick the guys back up afterwards – they all played well behind me. I think some innings I threw well and some I didn’t. There were a lot of different emotions going on in the game, but this was a big win for us.”

Opposing pitcher, Parker Hughes was all but unhittable in the first three innings of the game.

The Patriots bats were unable to get anything going against the junior pitcher until the fourth inning.

It was McLaughlin who got the first PLAS hit of the game on a stand-up double.

The very next batter, Carroll, brought the first two Patriot runs of the game home thanks to a home run over the left-centerfield wall.

The homer cut the Morgan lead to just two, at 4-2.

Stewart would follow up with the first of two triples on the day, and would score after a Hughes passed ball.

Morgan would respond in the following inning with two more runs to make it a 6-3 ball game.

In the bottom half of the fifth, PLAS would again cut into the lead, thanks to an Evan Strother RBI-single and an RBI-triple by Stewart.

That would be the last time either team would touch the plate until Stewart’s game winning hit two innings later.

While the hitting came around for the Patriots when the team needed it to, there were still come concerns about the defense in the field following the game.

With two days off before the annual Pike Liberal Arts baseball tournament beginning on Thursday, Austin said his guys will work through those problems and get some much needed rest at the same time.

“We get a chance now to straighten it out (the defensive) in the next two days,” the head coach said.

“We are wore out, we are tired. We are going to get us some rest in the next couple of days before we go back at it. When you are tired, you don’t play up to your potential. Momentum is not there. We have played 11 ball games in two weeks. But I am satisfied where we are at.”