You can come home again 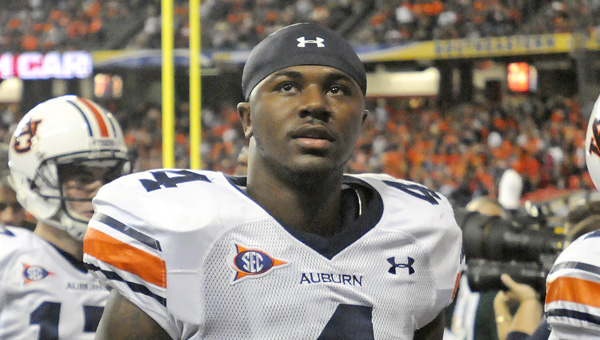 Zac Etheridge (4) walks off the field before the 2010 SEC Championship between Auburn and South Carolina in Atlanta, Saturday, Dec. 4, 2010. Etheridge will be in Troy Saturday to sign a book commemorating Auburn's National Championship run. (Messenger Staff Photo/Thomas Graning)

For the last two months or so, Zac Etheridge has been a busy man.

The hectic schedules and long days began on Jan. 12, a day after his Auburn Tiger team won it’s first National Championship since 1957.

Since then, the senior defensive back has been celebrating the title with fans all throughout Alabama, preparing for his step to the NFL, working on getting his degree and stopping at several locations to sign a book about Auburn’s run to the championship, titled “All In.”

It’s the latter that will bring Etheridge back to his home town of Troy on Saturday afternoon and to his old stomping grounds at Charles Henderson High School to sign copies of the National Championship book.

Etheridge will be at the high school from noon to 2 p.m. today to sign copies of the book that chronicles Auburn’s championship run.

The book itself will also be available for purchase at the high school. This will be the third stop for Etheridge on this book tour, making stops in Auburn and Hoover before coming to Troy.

“The book is pretty nice,” he said. “I think it’s worth buying and I hope a lot of people come out and support what we are trying to do. To celebrate what we at Auburn was able to do this past season.”

When Etheridge is not traveling, he is keeping in top shape for the upcoming NFL Draft.

On Tuesday, Etheridge and several of his Auburn teammates, including Cam Newton and Nick Fairley, competed in the university’s Pro Day. And there, the Tiger senior said he thought he performed well.

“I have been training for Pro Day pretty much since the National Championship game,” he said. “And things went well.

“It’s been a grind (preparing for it) and it’s going to stay that way until the draft probably because I will be working out for different teams. I thought I moved pretty well in my position drills and I ran a good (40-yard dash). There were some things I could have done better, but all in all, I think it went outstanding.”

While Etheridge now finds himself preparing for life after his career at Auburn, his time as a Tiger is one he will never forget – but for a much more important reason then a championship ring.

Less then a year after suffering a hit that could have potentially left Etheridge paralyzed, he not only returned to the field, but started every game for the Tigers during his senior season. For that opportunity, he is most thankful for above everything else that happened in 2010.

“Being able to play it – that’s it,” Etheridge said. “Getting that clearance to go back out there during that first game and to play this whole season without an injury. I will forever be grateful to God for all that he did for me.”