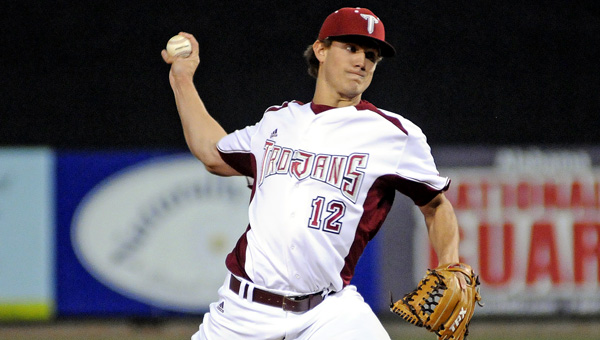 It took a while for the Troy Trojans to get things going on Friday night at Riddle-Pace Field, but when the bats finally came to life the Trojans scored runs in bunches in a 15-2 victory over visiting New Orleans.

The Trojans improved to 10-3 on the year with the win while UNO fell to 1-12 with their 11th consecutive loss. The teams will meet in a day-night double-header on Saturday. The opening game will start at 1 p.m. with the nightcap set for a 6 p.m. start.

Troy had a hard time finding a groove early in the game against the Privateers’ starting pitcher Tyler Sanders (0-3). The UNO senior retired nine of the first 10 batters he faced and had a 1-0 lead after three innings thanks to a Steffan Farrell home run off Troy starter Tyler Ray (4-0).

“Their kid was pitching pretty good,” Trojans coach Bobby Pierce said. “We got a few balls off the bat early, but had nothing to show for it. Tyler pitched a good game. One kid got a big swing on him early. We finally got the bats going, scored some runs and when they got into the bull pen they had a hard time throwing strikes.”

Troy finally broke through against Sanders, scoringt seven runs on seven hits in the fourth inning. The big blows in the inning were a two-run single by Blake Martz and a grand slam homer by Todd McRae, the first homer of his Troy career. McRae went to the plate just trying to hit a fly ball to right to drive in a run, but got the ball up and over the big wall in right field.

“We tell them all the time that if you play the game the right way you’ll get credit for it,” Pierce said. “We are starting to do more of that. We did a nice job against Alabama, we just didn’t have a lot of opportunities. Tonight we had some opportunities and we took advantage of it.” Troy native William Teal saw his first action on the mound for the Trojans in the eighth inning and senior Nick Ward closed things out with a perfect ninth. “William is healthy and ready,” Pierce said of the sophomore, who is coming back from Tommy John surgery. “He just has to work some kinks out.”

“All guys who go through surgery have to go through that. I thought the ball came out of his hand pretty good. He was a little erratic, but his fastball looked good. We are trying to get him ready for a start on Tuesday and it was good to get him out there tonight and break the ice.”

Adam Bryant and Logan Pierce had two hits each for the Trojans while McRae drove in six runs in a game for the second time this year. Jacob Dixon pinch hit for McRae in the eighth and added a two-run triple.

For Bryant, his single to lead off the fourth inning was the 200th hit of his career, making him just the third player in Troy history to reach that plateau.

Michael Tedesco led UNO with two hits in the game.

Pierce said that he hopes to let a lot of players see playing time in the double-header on Saturday.

“We’ll go with Drew Hull in the first game and Ryan Sorce in the second,” Pierce said.