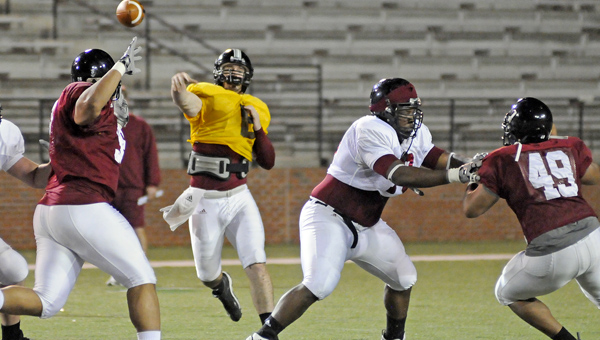 The last time the Troy Trojans were under the lights of Veterans Memorial Stadium competing against an opponent was in late November.

On Thursday night, the team was back out on the field, competing in a scrimmage – against itself.

Troy was split into two groups, offense in white and defense in cardinal, as the players and the coaches were looking to cap off the first week of spring practices with the first of several scrimmages.

“We are missing a lot of folks,” head coach Larry Blakeney said following the scrimmage.

“We are not going to beat anybody right now,” the coach added, “thanks goodness we don’t have to play anyone right now.”

The three Trojan quarterbacks were leading each respective offense, as Corey Robinson was with the first string, Luke Barnes with the second and K.D. Edenfield conducting the third string players.

Both Robinson and Barnes threw a touchdown pass and an interception.

Robinson threw for 169 yard, which was the highest of the three, while the former Charles Henderson quarterback, Edenfield, finished 6-14 for 46 yards.

“We got a lot to work on, but I definitely think there is stuff we can build on,” Robinson said.

With a relatively young group of receivers going into the season, senior Chip Reeves will be the crafty veteran. On Thursday night, he led all catchers with four receptions for 57 yards.

Jaquon Robinson and Jamel Johnson finished with three receptions for 52 and 35 yards and a touchdown a piece.

Defensively, Jonathan Massaquoi picked up where he left off last season, finishing with four tackles and one sack.

“I don’t feel like I have anything to prove to anyone, but myself,” the defensive end said.

“Things always begin off rough and tough, but things are coming together. I like the (defensive) group we got – I’m eager to see what all we can do.”

Trojans back to work at spring practice