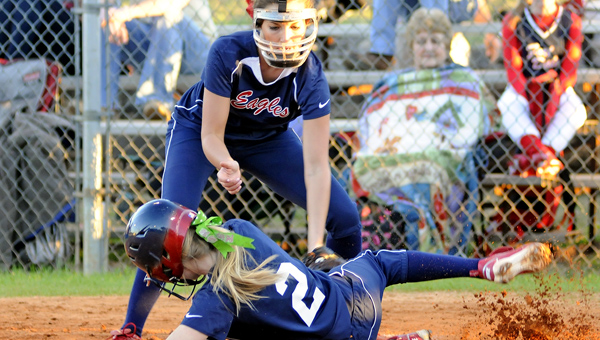 Good things always come to those who wait, even if it is only for a short amount of time.

That is exactly what the softball team of Pike Liberal Arts had to do Monday afternoon.

While rain may have ruined the Patriots’ chances of winning its season opening game, the team did not have to wait much longer to get the season started off on the right track.

Just a day, in fact.

On Tuesday night, PLAS found a way to outlast area rival, Fort Dale, 5-4 in eight innings to not only get its first victory of the season, but also get its first area victory.

Despite facing a tough team right out of the gate, head coach Mendy Avant said she was pleased with that she saw from her ball club.

“We looked pretty good even though we are young,” Avant said. “I don’t like to really open up with region games, but we won. The girls played hard in our first real game situation. I’m glad that we were able to get that win and situation under our belts.”

In the Fort Dale game, the Patriots found themselves down 4-2 early on and had to battle back to eventually get the win.

“They didn’t quit, and that says a lot about this team,” Avant said.

What makes this team dynamic is how is made up.

There are just a handful of girls on the current roster who are strictly varsity players, Stephanie Finlayson, J.J. Jones, Josie Free and Merla LaViner, with the rest playing both varsity and JV.

Each of the girls mentioned helped lead the Patriots to a state tournament berth last season, but there were also a number of younger players who contributed then and are looking to do the same now.

At the forefront of those younger players are pitchers Kaylee Taylor and Ellie Barron, who will be the Patriots’ main starters.

Even with the depth PLAS as on both the mound and the field, it’s the comradery this season’s group shares that will not only be a big asset but also make it a team that is tough to beat, according to its coach.

“All in all, these girls are playing good together, despite the age difference,” Avant said. “They seem to mesh and pull each other through. I think that is going to help us this season. If your team doesn’t mesh, it doesn’t matter how many good athletes you have, they are not going to play together.”

Every team has its areas of improvement and less than 24 hours after the team’s victory, the Patriots were back on the field looking to improve.

Against Fort Dale, PLAS left 10 girls on base and making sure those runners get home was the main focal point of Wednesday afternoon’s practice.

“Our hitting is looking good right now,” Avant said, “but we can’t leave that many people on base.

“We are hitting to get on (base) but we are having mental base running errors once we get there. So we worked on that a lot.”

When the team is able to put everything together, Avant said not only will this team be good this season, but for seasons to come.

“I feel like, we will do well (this season),” the coach said.

“If they don’t, we have the future to look forward to.

“We have a good group of girls here, who are young, but getting a lot of playing time. Our JV girls, which make up a lot of the varsity team beat Fort Dale 15-0, so it’s kind of like playing the game girls are two different teams on two different levels of play.”