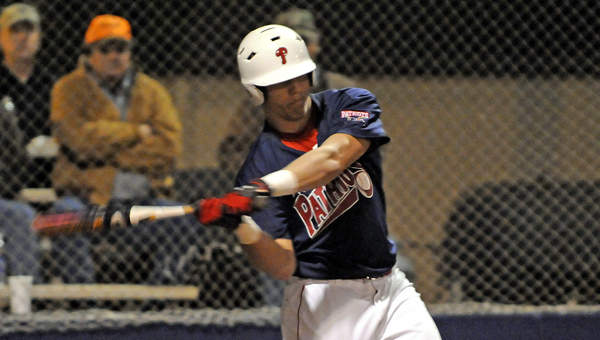 Above, Nick McLaughlin swings at a pitch during a Patriots game from last season. Pike Liberal Arts defeated area foe, Fort Dale, Tuesday afternoon at home by the score of 13-1 in five innings. McLaughlin finished 2-3 with two RBIs and a triple.

Unlike Monday, Tuesday was a beautiful afternoon for baseball and with it came a dominating performance by the Pike Liberal Arts Patriots.

Even though the season is just three weeks in, the team in red and white were competing in its biggest game to date – the area opener.

Fort Dale marked the first opponent and one the Patriots know quite well.

Last season, PLAS outscored the Eagles 36-11 in two games and even though it is a new season, the Patriots’ dominance over Fort Dale continued, thanks to a 13-1 victory in five innings.

“We played about as good as we could play,” head coach Butch Austin said.

“There was just one error and Sam (Carroll) pitched about as good as he can pitch (Tuesday). Fort Dale has a good ball team – and I am proud of our guys for how they played.”

On the mound for the Patriots was the team’s No. 1 starter in the senior Carroll.

And the right hander did not disappoint.

Of the 74 total pitches Carroll threw in the game, 46 were for strikes, as the senior finished with a complete game, striking out five while allowing one run off of three hits and five walks.

In the second and third innings however, the Patriot pitcher would find himself in trouble as the Eagles would load the bases with runners.

Thanks to the defense behind him, both scenarios would end with the same result – zero FDA runs.

“When we turned that double play in the third inning and I think that was the biggest play of the game. Other than the walks, I think I pitched pretty well. I threw strikes when I needed to. This was a big win for us, we are getting things done.”

The lone Eagle run came in the top of the fifth inning just before the final out was made. Since being shutout in the season opener three weeks ago against Glenwood, the Patriots have scored 39 runs in the last three games.

PLAS struck first in the second inning, after a Andrew Quincey RBI single brought home Lawson Stewart, who reached with a single of his own. The home team would add another run on a pass ball to take a 2-0 lead after two.

In the third, the Patriots struck again thanks to another Quincey at bat. The senior’s two-RBI double made it 5-0 after a Blake Floyd sacrifice fly brought home Nick McLaughlin.

In the bottom of the fourth, PLAS blew the game wide open thanks to an eight run inning.

The biggest hit came from lead off hitter, Chandler Avant, who hit a three-run homer over the right field wall.

Also in that inning, McLaughlin had two RBIs in two at bats.

“This was the biggest game of the year for us because it was in the region and we needed to play good,” Austin said.

“We hadn’t really played a complete game yet this season, but we did that (Tuesday) and we knew we needed to coming into this game. I’m proud of our guys. I think we got some momentum going right now.”

All nine Patriots in the lineup reached base safely either by hit or walk against the Eagles.

“It all goes back to playing for the team and winning as a team,” Quincey said about the area victory. “It’s not an individual thing, it’s a team thing.

“It feels good to get that first area win, it get us one step closer to the playoffs.”

PLAS will again be in action this weekend in Phenix City, as they take part in the annual Border Wars Tournament.