Patriots get ready for Fort Dale 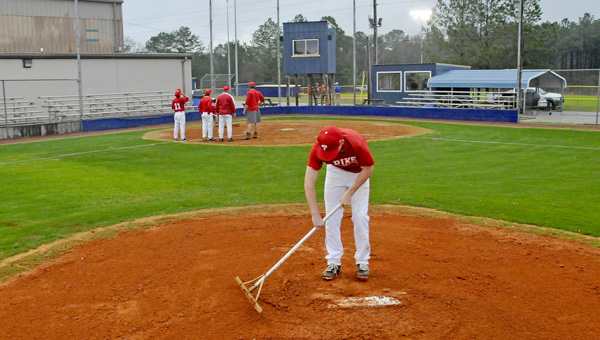 A Pike LIberal Arts School player rakes the mound after a baseball game against Edgewood Academy was cancelled due to weather in Troy, Ala., Monday, Feb. 28, 2011. Edgewood was winning 2-1 in the second inning when the game was cancelled. (Messenger Staff Photo/Thomas Graning)

Despite rain and gusting winds, Butch Austin Field was the site of baseball Monday afternoon.

Or at least for an inning and a half.

As the rain and winds proceeded, the baseball did not as the Patriots and the Wildcats of Edgewood will now have to figure out a time when the two teams can meet later on this season, as the game was called due to inclement weather.

Play was halted in the top of the second inning, after Edgewood had grabbed a 2-1 lead.

“The umpires decided the mound was the problem and called the game,” Pike Liberal Arts head coach Butch Austin said.

“It was there call and they decided it was not good enough. And that’s a little disappointing, we wanted to play Edgewood because they were a good team.”

All of the stats for Monday’s ball game will be erased when the two team resume play.

There has been no makeup date set.

This was the first time the Wildcats had made the trip from Elmore to Troy since the 2009 season.

The two teams have played every season since then, with the Patriots making the trip each time.

While the Edgewood game may have been rained out, PLAS has another big game due up today.

And with a forecast that calls for sunny skies, the Patriots will look to get its first region win of the season, at home, against Fort Dale.

The Eagles have only played two ball games so far, splitting a double-header with Crenshaw County.

Last season, the Patriots took both games from the Eagles, winning by a combined score of 36-11.

A big part of those two wins came from a player who will be hoping to keep that winning trend alive – Sam Carroll.

“This is the first area game of the season, so it’s the most important right now,” the senior said.

“I’m going to do my best to get them out every inning. I got to throw strikes, but I’m not nervous for this game, just excited.”

The Patriots and the Eagles will get underway at 3:30 p.m. today.