Trojans back to work at spring practice 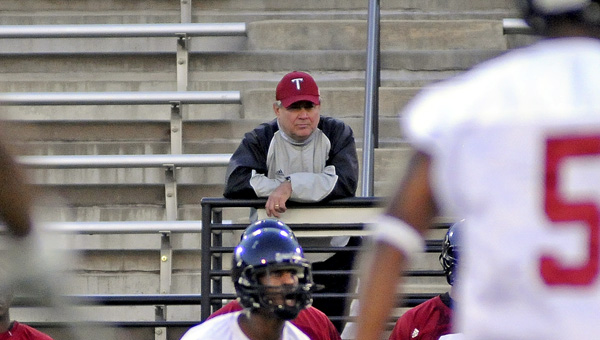 All that stands in between the Trojans and the 2011 regular season opener is just 205 days.

While that may seem like far off, Troy did not want to waste anytime, as it hit the field for the first of several spring practices earlier than usual.

And with good reason

There is much for the Trojans to prepare for. Not only does the team open the season at Clemson but also the challenges of defending the Sun Belt Conference for a sixth-straight season lie ahead.

Just a little over two months since the Trojans claimed its second New Orleans Bowl victory, the team is back on the gridiron with 15 practices total practices, including three scrimmages.

With one practice down, so far, so good, according to head coach Larry Blakeney.

“We had a good first practice,” the head coach said. “It looked like we retained stuff well

“It was a good first day. There was a lot of spirit and the guys ran around good.”

Wednesday’s practice, as well as today’s, is without pads. The team will be in full gear for the first time this year on Monday.

The team will be entering these first few practices with an entirely different mind set as opposed to last year around this time.

Then, the Trojans were looking to find the heir apparent to Levi Brown at quarterback.

Now, Troy has that replacement in Corey Robinson, whose first year was highlighted by two major honors – Sun Belt Freshman of the Year and MVP of the New Orleans Bowl.

And even though depth at the position was in serious question towards the end of the year due to injuries, that is not the case now.

Back in the field and participating in some drills is senior Jamie Hampton.

It was back in October against Middle Tennessee, when Hampton’s season came to an end after a hit left his right leg broken in two places.

“Jamie is going to be very limited throughout practice,” Blakeney said.

“We just want to try and get him some work and we want to see if Jamie is going to continue to improve. He is getting some throws in but we aren’t going to let anyone get near enough to hit him – or any of our quarterbacks for that matter.”

The other two quarterbacks getting looks are freshmen K.D. Edenfield and Luke Barnes.

“Those guys are working about the same amount,” the coach said. “Just trying to get them phased in where they can get the ball to the right people and make plays themselves.

Edenfield is of course the son of Troy offensive coordinator, Kenny Edenfield, and graduate of Charles Henderson High School.

The 6-foot-2 Barnes is a product of Fort Walton Beach High School. One position down, another position to worry about.

For the second-straight season, a record breaking offensive player will be graduating and potentially, with the NFL calling.

Wide receiver Jerrel Jernigan added his name to a handful of records thanks to his work the past four years at Troy, and now, his old team will begin to look to pick up where he left off – which is exactly what the objective is for these practices, according to the head coach.

“The main objective is to begin to find pieces to the puzzle,” Blakeney said.

In to help fill the void will be receivers Chip Reeves, Jamel Johnson, Brett Moncrief and running backs Shawn Southward and Chris Anderson.

Moncrief will be sitting out of the rest of the spring with a broken foot, suffered while running routes.

The Trojans’ first scrimmage will take place on March 3, at Veterans Memorial Stadium at 6 p.m.