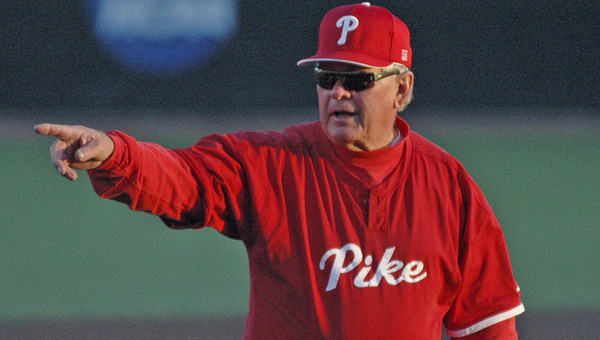 For the third time this week, the Pike Liberal Arts Patriots will be playing a game on the diamond.

And in doing so, the team will be looking for its third-straight win, as it travels to face off against Crenshaw Christian.

Even though PLAS has already won both games this week, the team has done it in very different ways.

Against Prattville Christian, the Patriot pitchers threw 73 balls to 72 strikes in a 13-8 win.

On Tuesday, everything began to come together for PLAS, as it took down Lakeside, 13-3.

“We had far too many balls (against PCA), walked too many and hit some batters – it was awful,” Austin said.

“We won though. And against Lakeside, I thought we played really well defensively. We started to hit the ball pretty well too against a good team. If we can get everyone where want them, I think we are going to come together as a team.”

Heading into today’s game, the Patriots will be without starting shortstop, Chandler Avant, who is away from the team on trip to Washington D.C.

However, despite that absence, a big part of the team’s game has returned – the hitting.

“We started hitting the ball real well (against Lakeside),” Austin said, “we started to hit some good line drives against a pitcher who was throwing 85 miles per hour.

“I thought we played with a lot of intensity, which wasn’t there on Monday. We aren’t there yet, but we are getting there.”

Both Robert Benton and Nick McLaughlin combined to reach base eight times against Lakeside. Benton was 1-1 with a single and four walks, while McLaughlin was 3-3 with a home run, a single, a triple and 4 RBIs.

The two also combined to score five of the 13 Patriot runs.

“I think it was just a matter of time before we started hitting,” McLaughlin said.

“Everyone is starting to come around.

“We have a lot of base hitters out here and a lot of team speed, which is different from last season. It’s good to start scoring some runs. After (the Glenwood game), I think we were starting to worry, but after the past two games, I think we will be fine.”

For the 5-foot-6 Benton, it’s his size that he believes has given him the advantage so far when facing the opposing pitching, among other things.

“I’m just being picky a little bit,” the sophomore said with a laugh. “I haven’t really seen a good pitch to hit yet.

“I don’t think they really know how to throw to me. But it’s been a lot of fun so far, things have been working out.”

Taking the mound for the first time this season as a starter is junior Blake Floyd.

Floyd made three appearances last season, earning two wins in 10.2 innings with an ERA of 3.94.

The right hander did see some action on the mound against Prattville Christian earlier this week.

“I’m just going go out there and give it everything I got and try to help get my team a win,” Floyd said.

“All I can do is go out there and do the best that I can. There isn’t too much to think about. Having pitched last year as a sophomore on the varsity level, getting that experience was helpful and something that I can use (today).”

PLAS and Crenshaw Christian will get under way with a first pitch set for 5 p.m.

The Patriots will return home for a double-header Monday against Edgewood.