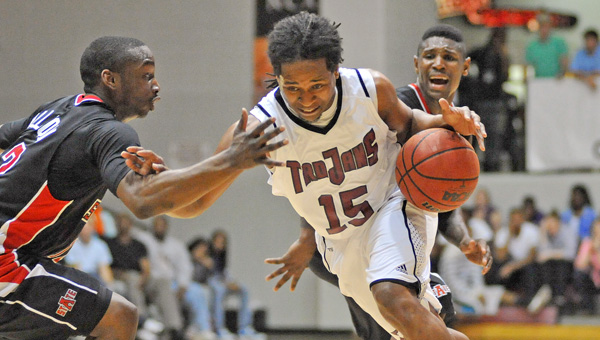 On a night where Troy’s five seniors were honored, it was an Arkansas State bench player who shined brightest.

With 15 minutes left in a close ball game, Adam Sterrenberg took to the court and took over, outscoring the Trojans by himself 11-1 in a five minute span and promptly giving his team a lead that it would not relinquish.

In Saturday’s home finale, Troy was unable give the home fans one last win, as Arkansas State ran away with a 71-63.

Along with the Sterrenberg factor the Red Wolves were able to dominate the boards all game long.

ASU finished the first half with 28 total rebounds, 13 of which were on the offensive side of the ball. 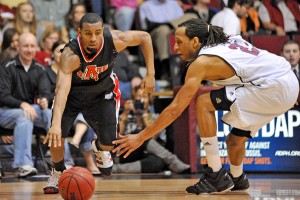 Troy had a total of ten.

ASU would build on its 35-34 halftime lead in the second half thanks to both Sterrenberg and the team’s rebound effort.

“The fact that they were able to do so well on the boards in the first half was a sign of how much effort they were going to put into trying to make sure they were scoring even if they missed shots,” Troy head coach Don Maestri said.

“In the second half, Arkansas State played  a better basketball game then they did in the first half. I thought they came out scored right away. We really struggled the whole game. I thought we looked tired at times. We just didn’t play good basketball. We are not talented enough to not play well.”

Troy would mount a little bit of a comeback with just under eight minutes to play, when the team cut a nine-point ASU lead to just three at 56-53, but that would be the closest the Trojans would get.

From there, the Red Wolves would go on another run, this time scoring eight-straight baskets, to once again gain a sizeable lead.

ASU nearly doubled Troy in the rebound department, grabbing 49 to Troy’s 25, and outscored the home team 20-4 on second chance shots.

The  Red Wolves also out shoot the Trojans from the field, hitting 42.4 percent of their shots, to Troy’s 36.7 percent. 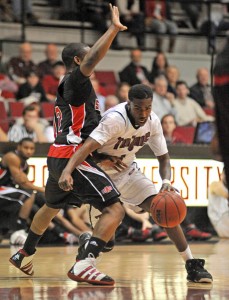 “I had to self check myself,” Vernon Taylor said.

“I wasn’t doing what I was supposed to be out there.

Taylor led all scorers with 17 points, and was 8-of-11 from the free throw line.

The senior’s streak of consecutive free throws made ended at 37-straight.

On the other end of the court, Sterrenberg’s 15 points was his most ever against a Division I opponent.

“It was not a night that was meant to be,” Maestri said.

“There were a lot of things going in that could have drained us. But we didn’t play good basketball and (ASU) deserved to win the game.”

The loss dropped Troy to 8-18 overall and 6-8 in Sun Belt play, with just two games remaining before the conference schedule.

Before the game, the Trojans paid homage to Taylor, Bernard Toombs, Travis Lee, Regis Huddleston and Levan Patsatsia for their efforts over the past couple of seasons for Troy.