Trojans hold on to win in OT 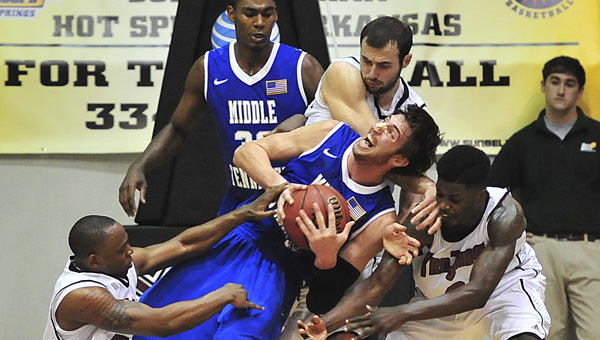 Above, Vernon Taylor, Regis Huddleston and Levan Patsatsia go after the ball in the second half of Troy’s game against Middle Tennessee Thursday night at Sartain Hall. The Trojans would pull out a 69-65 win over the rival Blue Raiders in overtime. Photo/Kevin Glackmeyer

Playing in overtime this season has not gone in the favor for the Troy Trojans men’s basketball team.

Before Thursday night’s game, the Trojans were just 1-3, including winless in two tries in Sun Belt play.

But that was where Troy found itself against Middle Tennessee at Sartain Hall.

To make matters worse, the Blue Raiders handed Troy its second worse loss of the season back in January.

However, the past would not repeat itself when it was all said and done.

Not once against the Blue Raiders did the Trojans fall behind, as the team was able to fight off the opponent’s late surge, foul trouble and injuries to get a 69-65 win in overtime.

“It was a gutty performance by our basketball team (Thursday night),” head coach Don Maestri said.

“The fact that we got the lead and never ever gave it up was really a significant part of the victory. (Troy) really had to dig down and fight to now let (MTSU) take a one-point or two-point lead. They did it sometimes by getting an extra effort rebound, or a charging foul or a turnover right when we needed it so they couldn’t go ahead of us. It was a gutty performance against a mighty good basketball team.”

The Trojans stormed out of the gates, taking the lead seconds after the tip-off thanks to a Travis Lee 3-pointer.

From there, the Trojans continued to play hard basketball, expanding the lead to as big as 15 points late in the first half.

At the break, Troy held a 37-27 lead, but it would be one that was contested as both teams entered the court for the second half.

But the Trojans would not lose composure, hanging out to the lead.

With under a minute to play in the game, the Blue Raiders tied the game at 61-61.

A Vernon Taylor jumper with 16 seconds left gave Troy the lead, but MTSU would answer back to tie the game and send it into overtime.

The Trojans would take the lead again seconds into the quarter, on a Will Weathers free throw, but just as before, the Blue Raiders would tie the game at 65-65.

It was another made free throw, this time by Steven Cunningham, which gave the Trojans the lead for good at 66-65 with three minutes left to play. The score would remain the same until there was just 36 seconds left, and after a Cunningham miss, senior Levan Patsatsia was there for the put back to give Troy a 68-65 lead.

The Blue Raiders would not hit a shot the remainder of the game.

“Steve drove in, and I had a good position and I put it in,” Patsatsia said after the game, “it was nothing special, I just made a play.”

Weathers led the way for the Trojans, scoring 15 points and bringing down eight rebounds in 45 minutes.

The Troy defense held MTSU to 1-of-17 from the 3-point line.