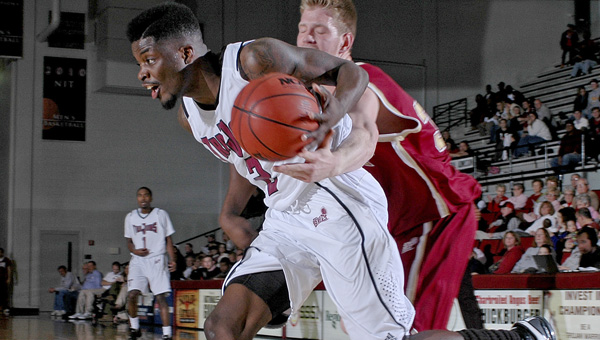 The last time the Trojans faced off with their rivals from Murfreesboro was a game Troy would more than likely choose to forget.

Back in January, Middle Tennessee jumped out to a 25-2 lead in the first half in route to a 63-51 victory over the Trojans.

Now, almost a month to the day of the loss, the Trojans again find themselves preparing for the Blue Raiders on a two-game winning streak, but in a much different atmosphere – Sartain Hall.

“We went down there, and they punched us in the face real quick. We were down big in the first half and we had to snap out of it and wake up to play basketball. We are way better now than we were then though. It’s going to be a tough fought game.”

Since the January meeting, the Blue Raiders have been nearly unbeatable, winning seven of their last eight games, including five in-a-row.

Because of its recent success, the Blue Raiders have pulled to within a game of first place in the East Division.

Overall, MTSU is one of just three teams in the conference with a winning record, at 14-12.

In Sun Belt play, the Blue Raiders are 9-4, which is currently good enough for the second best record in conference play.

In the all-time series between both Troy and MTSU, the Blue Raiders hold an 8-6 advantage.

In Troy, the situation changes, as it is the Trojans who have a 5-2 record against MTSU when playing on the hardwood of Sartain Hall.

Past records aside, the Trojans are going to be up against one of the best teams in the league tonight, and head coach Don Maestri knows it.

“Middle is the hottest team in the league right now,” the coach said.

“They are now just one game out of first place in our division. So they really have been the most improved team in the league. At the beginning of conference play, they looked like a middle of the pack team, but now they are fighting for a bye in the conference tournament. These last two weeks for them are extremely important.”

Even though the Blue Raiders have struggled to score points at times this season, averaging 70.8 points per game, the team shuts down it opponents, allowing an average of 68.4 points per game.

MTSU has forced nearly 400 turnovers and averages close to 35 total rebounds per game as well.

“They have won enough now where they really have a strong belief in what they are doing. Middle is going to be one of the most confident teams we’ll play the rest of the season.

Should the Trojans pull out a victory tonight, it would be the first time all season the team has won three-straight games and would also be the third consecutive victory over the Blue Raiders at home.

“We took a lot of beatings and there is only so much a man can take,” Taylor said.

“I feel as a team, we are getting tired of getting beat all the time, but now, things are starting to click and we are playing good team ball.

“We are going to come out already to play and do out best to give (MTSU) a punch back,” he added.

Troy and MTSU will tip-off at 7:30 p.m. tonight at Sartain Hall.